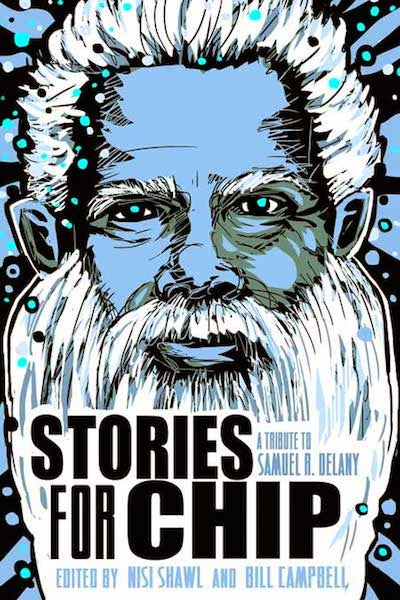 I was seventeen when I first read The Einstein Intersection. It was an important book for me.  Its author, Samuel R. Delany, was only twenty-five when he wrote it and already he was transforming the genre of science fiction. It is hard to exaggerate the influence he has had on us all.

So when Nisi Shawl asked me to contribute to a festschrift in Delany's honor, there was only one response I could make.

Stories for Chip: A Tribute to Samuel R. Delany, edited by Nisi and Bill Campbell, will be published in July by Rosarium Publishing.  It contains stories and essays in Chip's honor.

Here, in alphabetical order by author, is the table of contents:

Kathryn Cramer Characters in the Margins of a Lost Notebook

L. Timmel Duchamp Real Mothers, a Faggot Uncle, and the Name of the Father: Samuel R. Delany's Feminist Revisions of the Story of SF

Hal Duncan An Idyll in Erewhyna

Tenea D. Johnson Each Star a Sun to Invisible Planets

Claude Lalumiere Empathy Evolving as a Quantum of Eight-Dimensional Perception

Carmelo Rafala Song for the Asking

Michael Swanwick On My First Reading of The Einstein Intersection


So now you know whether you need this book or not.  I'm a big fan of books where you can say that.

You can find the Rosarium Publishing site here.

Posted by Michael Swanwick at 7:40 AM