A Memoir in the Form of Four Denim Jackets (Part 2) 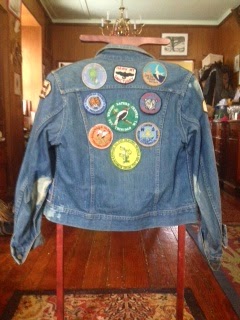 This denim jacket isn't even mine. It belonged to a young woman I met when worked as a Clerk-Typist 1 for the Commonwealth of Pennsylvania Department of Health Bureau of Laboratories.  At the time it was located in Landis, an old tuberculosis hospital in Philadelphia.  Marianne Catherine Porter was an interesting woman.  She was trained as a marine biologist and worked for the Bureau as microbiologist.  The patches on her hacking-about jacket were for various bird sanctuaries she'd visited, including one in Trinidad and Tobago.  Not visible in this photo is a patch on one sleeve for the Space Shuttle, which she had seen in transit.

Marianne was smart, witty, and had a variety of interests.  She was exactly the sort of person I wanted to have for a friend.  So what is her jacket doing in my closet?

Reader, I married her.


Above:  I like to tell people we met in a TB hospital.  It sounds more romantic that way.