This Glitterati Life: Morrow and Gregory at Big Blue Marble 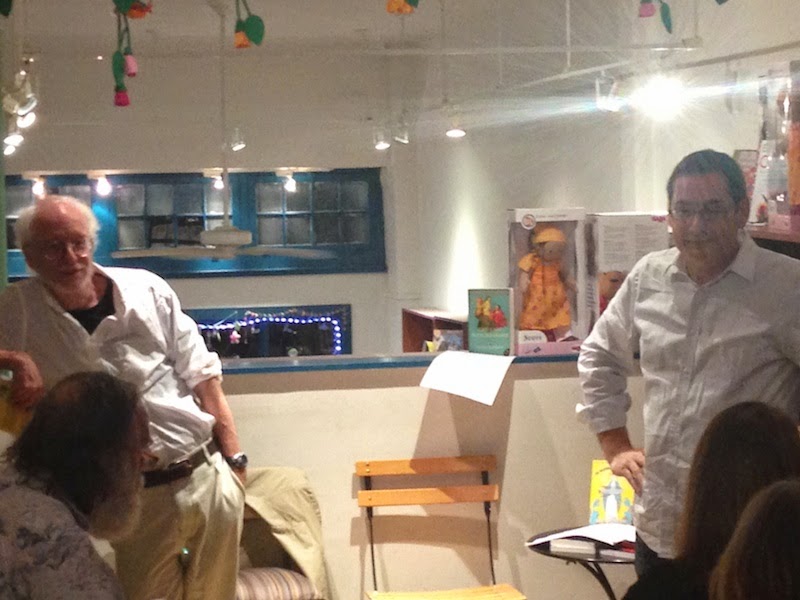 Saturday, I went to Big Blue Marble in Chestnut Hill, Philadelphia, to hear James Morrow and Daryl Gregory read.  It was a hoot.

Jim read from his latest book, The Madonna and the Starship, a novella in which a writer of pulp television has to face down diabolical space lobsters.  Daryl read from We Are All Completely Fine, in which survivors of various horror-movie scenarios undergo group therapy.

In the audience were many writers including Fran Wilde, Eugene Myers, and Darrell Schweitzer.

Also, for some reason, a lot of psychiatrists.

There was a good turnout at Big Blue Marble.  But the sad truth is that, for a variety of reasons, you don't always get a crowd for readings and signings.  I was at a reading by Samuel R. Delany once, back at the peak of his popular fame, at which only four people attended -- and one was a book dealer who had brought a pile of books to be autographed so he could charge more for them.

So I always tell gonnabe writers -- if you're one, pay close attention -- that while they're still unpublished they should go to as many readings, signings, and other public appearances by writers they know are good.  "Just so when it happens to you, you won't slit your throat."

I've had published writers tell me that was the best advice they ever received.


Above:  Rather a terrible phone snap.  That's James Morrow on the left; Daryl Gregory on the right.