On The Shores of Little Narnia 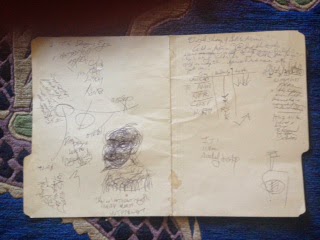 Because I know a lot of folks are curious about what the creative process looks like, I thought I'd share this with you.

I ran across this manilla folder the other day.  Every so many months, I go into the back yard --"Little Narnia," I call it -- late at night with a glass of Scotch to organize my thoughts.  This night, apparently, I had only the folder to write upon and a scratchy pen to write with.

Here's what I wrote:

"On the Shores of Little Narnia"

What is magic?  At first blush this seems a self-evident piece of rhetoric along the lines of "what is love?" and "What is New Jersey?"  But on contemplation it proves harder to answer than might seem.

* The Emperor knows all -- because he is consistently underestimated.

HE: all he issues a (something something) her death

It is almost a relief to stop.

"What did you expect?"

Every heart is broken

Was ever there an unlikelier triumph?

"Show me the mathematics of the human heart"

"Oh!" she said."I think your intentions are not honorable and I am afraid"

"I promise I will remember your name as long as I can."

But his name, if she had ever heard it, was gone entirely.  So, as long as she could turned out to be not very long at all.  Fire Orchid felt guilty about this for the greater part of an afternoon.

Stitch by stitch, page by page.  Fire Orchid did not ordinarily concern herself with the making of books.  She had a family to support. (?)

This time was different.

I do not have the freedom to contemplate truth/society/whatever free of the distractions of ordinary life.  Perhaps, freed of those distractions, they man nothing.

Not all the context for the notes is obvious to me.  But the arc diagram is clearly an early attempt to organize the novel that later became Chasing the Phoenix, out next year from Tor Books.  HE is the Hidden Emperor, a major character in that novel.

The wineglass garden, in the tradition of rock gardens and Claes Oldenburg's rope garden, would probably work quite nicely.  Which reminds me that I have to get the shoe garden in shape for next spring.  I'm afraid it was badly neglected this year.

The Dragon's Eye was a reference to the notebook I keep for the third Iron Dragon novel.

Fire Orchid is possibly my favorite character in Chasing the Phoenix, other than Darger & Surplus themselves.  I'm sorry I never wrote this story, because I have no memory of what its plot was to be.  The "stab story" is a story written for a "stab book," which involves a particular style of hand stitching.  Marianne was planning to make a stab book for Dragonstairs Press, and wanted me to write something for it.  Later, she came up with a scheme for the book which didn't involve me writing a story.

The barges pulled by canal serpents were a detail for the Darger & Surplus story that later became "Tawny Petticoats."  Published in Rogues, edited by George R. R. Martin and Gardner Dozois.

So that evening, I was working on two novels, at least two stories, and any number of notions.  The notes are schematic to a fault, but they were only meant to keep my thoughts retrievable for the next day.  Anything I didn't get around to doing serious work on by then would be as good as discarded.

I keep what I call "The Wonder Box", filled with old notes, scraps, fragments, etc., some dating back to early teenager years. Once in a while I'll dip into it. Some of the ephemera are simply head-scratchingly obscure, but I've written several stories inspired by old notes and scribbles that I no longer remember writing at all, much less why.

Shorter version: Never throw anything away.

Good observation, Bruce. I'll do a post on that someday.