The Evolution of the Martini (Part 1) 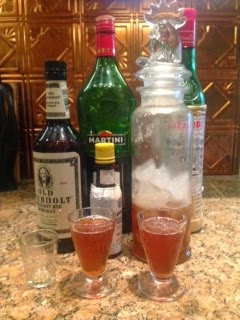 Like it or loathe it, the Martini is the most austere and uncompromising of alcoholic concoctions -- indeed, the very king of cocktails.

But how did it come about?

We at the American Martini Laboratory determined to find out, to sample the ancestral drinks, and to pass judgment upon them.  Over the next several weeks, one drink at a time, our researches will be shared here.

The scholarly study of the history of cocktails has been, since the beginning, a difficult one, and there are very few facts that are uncontested, particularly when it comes to the Martini.  However, the majority of scholars agree that the very first almost-Martini was a late nineteenth-century cocktail called the Martinez -- a drink consisting chiefly of equal parts of sweet vermouth and Old Tom gin.  This is the drink the AML will be testing and tasting next week.

But first, let's look at the precursor drink, that from which the Martinez was derived.  Which is, improbably enough, the Manhattan.

To understand this, it helps to know that Nineteenth-Century cocktails were almost invariably sweet and that, as often as not, they included a raw egg.  The original Manhattan did not include an egg, thank God, but it was even sweeter than the amber and autumnal drink we enjoy today.  To appreciate it, let's first look at a contemporary recipe for this drink:


There are variations, of course.  In my household we use cherries that Marianne has spiced in maraschino and add a few drops of the maraschino.

In the nineteenth century, this drink was much sweeter.  Here's one of several very similar recipes from the time:


This is the drink the AML recreated the other night and taste-tested.  It should be noted that the original recipe called for whiskey rather than rye.  That was for the simple reason that in the nineteenth century rye was what was meant when people spoke of whiskey.  You'll note also that the maraschino cherry has yet to make an appearance.  Back then, people were as likely as not to drop a slice of orange in their drink, along with possibly a splash of of simple syrup, just to sweeten it up.

And the result of the tasting?

The Nineteenth-Century Manhattan was, it goes without saying, a sweet drink.  It had not reached the golden beauty of the contemporary cocktail.  But it was on its way.  It was recognizably the same drink -- though probably not in the proportions that you and I would mix them today.

And it was in no way like the modern Martini.

Next Friday (if all goes as planned) I will post the second drink in this series -- the Martinez.  Which, while recognizably ancestral to the Martini, is still not a drink that could be mistaken for one.


Above:  The makings of the (Nineteenth Century) Manhattan.  The Art Deco glasses with naked female dancers are courtesy of the estate of William C. Porter, my late father-in-law.

What fun! Looking forward to the results of the second experiment.