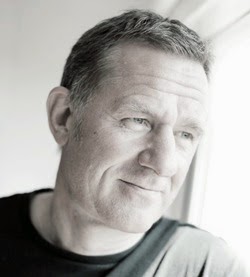 I only met Graham Joyce the once and that was in a busload of writers, so I'm not sure if he ever caught my name.  You couldn't say we were close.  Nor have I read much of his work.  I'm not big on horror fiction.  But there was that bus trip...

This was in San Francisco.  There was a World Fantasy Con going on, and somebody organized a signing at a bookstore with twenty or thirty writers.  A bus was rented to drive us from the convention to the signing and back again.  Flocks of people showed up to snag autographs they normally couldn't get.  It was a great deal for collectors with enough money to drop on a pile of new hardcovers and a terrific scam for the bookseller.  I have no idea who put that one together.

On the bus on the way back, there was a certain amount of jockeying for who would get to talk and who would have to listen.  Somehow Joyce found an opening and mentioned that he'd just won an award for best non-fiction book about sports.  He'd gotten a call asking if he'd be willing to be the goalie for England's national soccer (or football) team -- him forty-something years old, with a bad back, shot knees, eyesight going, you must be mad.  Ah, but it was the national writers' team and they had to take who they could get.  Plus there was a free trip to Italy in it.  So...

And on he went, mesmerizingly.  At one point, he said, "So I combined this with my experiences with soccer as I was growing up."  And we all leaned forward anxiously

"You made it self-deprecating, I hope?" somebody said.

And we all leaned back in relief.  An audience of writers is not quite the same thing as an audience of readers.

It was a lovely story and Joyce told it so well that even today I could tell you most of it from memory.  When I got home, I bought a copy of Simple Goalkeeping Made Spectacular.  Soccer means nothing to me, but I enjoyed it thoroughly.  I'm guessing that people who have actually played the sport, or watched it for pleasure, would love it to pieces.

Yesterday afternoon, Graham Joyce died.  The world has been diminished by one storyteller.  This is, as John Clute observed, deeply sad.

Based entirely on the one book and single bus ride, though, I'm guessing that he wouldn't want us to get all mawkish about it.  In my mind's ear, I hear his voice in that working-class accent of his saying the same thing his coaches would tell him if he twisted an ankle:  "Walk it off, lad!"

The august two-person ruling board of the American Martini Laboratory has decided to re-create the evolution of the Martini, drink by drink, starting deep in the 19th Century with the rather surprising ancestor from which this most austere of all cocktails ultimately arose.

The first installment (with recipe) will be posted on Friday.  Barring exceptionally bad or particularly good news, of course.