The Evolution of the Martini (Part 2) 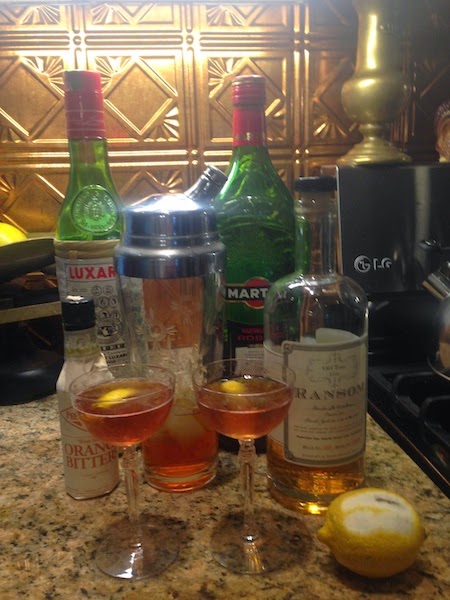 Last week we visited the ultimate ancestor of the Martini which, surprisingly enough, was the Manhattan -- or rather the Nineteenth Century version of the Manhattan.  Today, the Drink That Would Be King makes its first major mutation.  Somebody -- and there are many conflicting stories as to who it was -- made a Manhattan with gin instead of whiskey.  Thus changing history forever.

But first it has to be explained that just as "whiskey" a century-and-some years ago actually meant rye, so too "gin" did not mean London Dry Gin, which is the stuff we overwhelmingly drink today.  It meant either Genever Gin (the original, but of no relevance to today's post) or else Old Tom Gin.

Old Tom Gin is, simply enough, sweet gin.  It actually includes simple syrup in its formulation.  There are today, two commonly available Old Tom Gins -- Hayman's Old Tom Gin and Ransom Old Tom Gin -- and a slew of boutique Old Toms from craft distilleries, which will be ignored here simply because they're expensive and hard to find.

Embarrassingly enough, Hayman's and Ransom are very different-tasting gins.  That's because back in the heyday of Old Tom Gins, there was a great variety in the formulations, brand by brand.  No one knows which was used for the cocktail in question; presumably it varied from bartender to bartender.  For this experiment, Marianne and I bought a bottle of Ransom.

The new drink was promptly dubbed the Martinez and it caught on fast and hard.  There are many recipes for the Martinez, and while they are all, essentially, an old-style Manhattan made with Old Tom Gin rather than rye, we chose the following:


And the result was . . . drum roll, please . . . a surprisingly good summer drink.  It's still sweet, of course.  But sweet in a pleasant way.  The flavor of the Old Tom gin dominates lightly, and the other flavors harmonize with it.  This is the sort of cocktail I think of as a "lady drink" -- provided one imagines the lady drinking it as being your sophisticated New York City aunt, the one with the expensive enamel cigarette case with matching lighter, which she kept in her Chanel purse, and the scandalous past she never regretted.

Really, quite an excellent tipple.  Lovely color too.  I'd recommend it to anyone.

But no matter how many of them you drink, you'll still never mistake a Martinez for a Martini.  There were still several crucial steps yet to go before that could happen.

The American Martini Laboratory will be recreating those steps and reviewing them for you here in the near future.

That sounds quite tasty.

You forgot that the aunt was probably wearing gloves.

We will try this tonight with the Old Tom gin we bought in Stowe, VT.