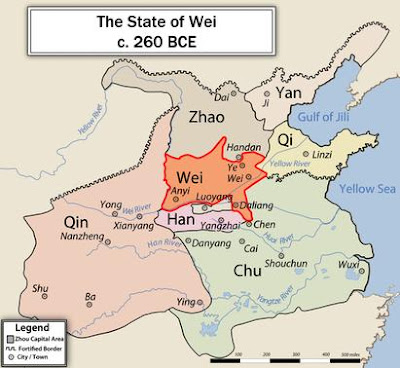 
I picked up a copy of E. T. C. Werner's A Dictionary of Chinese Mythology after reading a review of a book about the murder of his adopted daughter (it's a long story, but if you're curious, I'm sure you can look it up) which mentioned it in passing.  It seemed like a book I needed.

And did I?  Boy howdy, you betcha.  Here's an entry I just now found by opening the book to a random page and reading:

HSI MEN PAO -- Prefect of the Wei country, circ. 410 b.c.  His name is associated with his noble action in putting an end to the offerings of girls made to the God of the Yellow River.  The events reasulting in his apotheosis are related in Chapter 126 of the Shih-chi ts'e-i as follows:

In the town of Yeh, there was a witch and some official attendants who collected money from the people yearly for the marriage of the River-god.

The witch would select a pretty girl of low birth, and say that she should be the Queen of the River-god.  The girl was bathed, and clothed in a beautiful dress of gay and costly silk. She was then taken to the bank of the river, to a monastery which was beautifully decorated with scrolls and banners.  A feast was held, and the girl was placed on a bed which was floated out upon the tide till it disappeared under the waters.

Many families having beautiful daughters moved to distant places and gradually the city became deserted.  The common belief in Yeh was that if no queen was offered to the River-god a flood would come and drown the people.

One day Hsi-men Pao, Magistrate of Yeh Hsien, said to his attendants:  "When the marriage of the River-god takes place I wish to say farewell to the chosen girl."

Accordingly Hsi-men Pao was present to witness the ceremony.  About three thousand peole had come togehter.  Standing beside the old witch were ten of her feamale disciples.   "Call the girl out," said Hsi-men Pao.  After seeing her, Hsi-men Pao said to the witch:  "She is not fair.  Go you to the river god and tell him that we will find a fairer maid and present her to him later on."  His attendants then seized the witch and threw her into the  water.

After a little while Hsi-men Pao  said:  "Why does she  stay so long?  Send a disciple to call her back."  One of the disciples was thrown into hte river.  Another and yet another followed.  The magistrate then said:  "The witches are females and therefore cannot bring me a reply."  So one of the official attendants of the witch was thrown into the river.

Hsi-men Pao stood on the bank for a long time, apparently awaiting a reply.  The spectators were alarmed.  Hsi-men Pao then bade his attendants send the remaining disciples of the witch and the other official attendants to recall their mistress.  The wretches threw themselves on their knees and knocked their heads on the ground, which was stained with the blood from their foreheads and with tears confessed their sin.

"The River-god detains his guest too long," said Hsi-men Pao at length.  "Let us adjourn."

Thereafter none dared to celebrate the marriage of the River-god.

This took place in the reign of Wen Hou, the first sovereign of the Wei.

It is purely a fancy of mine that the noble Hsi-men Pao would get along with my own Aubrey Darger like a house afire.


Above:  The state of Wei.  I couldn't find a picture of Hsi-men Pao.  But we all know what that upright man must have looked like.

This story is a short biography from Shi Ji aka Records of the Grand Historian, so if you want more stuff like this you can probably find it in the multi-volume translations edited by William Neinhauser under the title The Grand Scribe's Records. I think the ones with "memoirs" in the title are the portions that have short biographical sketches like this one.

You can paste "西門豹治鄴" into google image search and see lots of pictures (most of them covers from grade school readers, stories about human sacrifice and public executions being a mainstay of children's literature) of this story. But the pictures of him appear are just generic upright official pictures.

David, thank you for this.

I'll confess that when you or one of the other Chinese-literate folk post here, I envy you your learning. But in a good way. I also envy Olympic gymnasts, world-class wood carvers, and people who can sing like angels, while still admiring the heck out of them.

Thank you for the complement. To be honest, there being well over a billion people in the world who grew up speaking, reading and writing Chinese from an early age, sometimes I feel like someone who grew up feral in the wilderness and only learned to read and write as an adult. It's nice as a personal achievement, but objectively I'm still behind the folks who started reading in kindergarten!