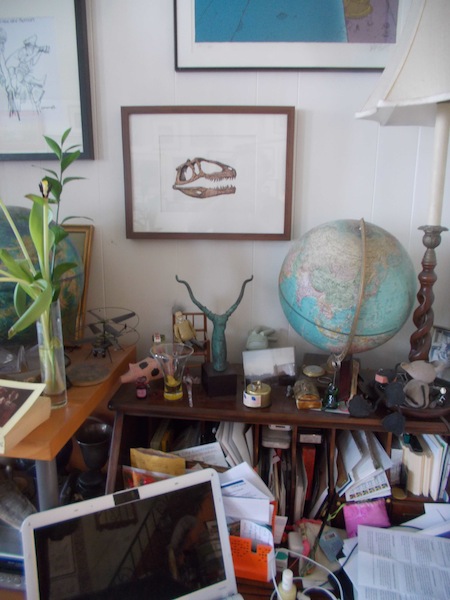 I spent a long and pleasant weekend in Virginia for a family wedding.  Now I'm back at the keyboard, weary but typing away.  Since, mirabile dictu, I have no news to pass along today, I thought I'd throw in a second plug for the Walters & Kissinger Etsy sale.

Robert Walters and Tess Kissinger are both paleoartists of renown.  Which is to say that they don't just paint and draw dinosaurs and related subjects, but they do so in close consultation with paleontologists. To paint, let's say, an Sinraptor, Bob will begin by drawing its skeleton.  This drawing goes back to the paleontologist working with the fossils for comment and correction.  This can take several passes.  Then Bob draws an écorché  -- the skeleton covered with muscles, but without the skin.  Back and forth it goes for corrections.  Then he draws the animal covered with skin.  After a last round of consultations, he paints the final version of the dinosaur.

This is why you were never able to afford to buy a museum-grade scientific illustration to hang on your wall.  Those things are labor-intensive, and the people who can create them are not numerous.  Also, more and more the illustrations are being created on the computer.  So the hand-made originals are getting progressively rarer.

All that's background to the fact that Bob and Tess have put up a number of original illustrations -- the final, finished product, not an intermediary step -- for sale at what I consider to be bargain prices.  I owned several major Robert Walters pieces already, but I took advantage of the sale to buy two skulls by Tess Kissinger -- one for Marianne's Dragonstairs Press office, and one as a birthday present for our son Sean.

I'm not sure how long these things are going to be for sale or whether any more items will be added to the shop.  But I do know that the supply is finite.  Right now, there are a dozen of Bob's illos available for prices ranging from $125 to $200, unframed.  There's also a Tess Kissinger Sinraptor skull left unsold.  There were rather a lot of skulls available when the sale began, but people like me leapt upon them with small, glad cries.

You can find the Etsy shop here.


Above:  There resides the Giganotosaurus skull, just beneath the Moebius serigraph.  You'll note that I very carefully bought it before letting you know such things were on sale.

Family wedding in Virginia! OMG - did one of my kids run off and get married and forget to tell me?