My Undead Story Lives! It Lives! 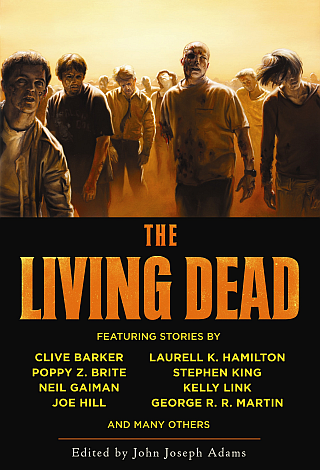 I vividly remember getting a royalty check for my story in The Living Dead -- which in itself was notable because most anthologies do not sell enough to earn anything above and beyond the advance -- and being astonished at how large it was.

It turned out that editor John Joseph Adams had found the sweet spot for a theme anthology by a) carefully assembling pretty much all the very best zombie stories written to date and then b) publishing it at exactly the right moment -- just after zombie fiction went mainstream and just before every other editor in the world decided to put together exactly such an anthology and discovered that Adams had beat them to the punch.

When there's no more room in hell, the dead will walk the earth!

From White Zombie to Dawn of the Dead, Resident Evil to World War Z, zombies have invaded popular culture, becoming the monsters that best express the fears and anxieties of the modern west.


And many, many others.  This is one big book, with an excellent list of authors.  How excellent?  Excellent enough that I wasn't offended by not making the short list on the cover.  Much.

My own story, "The Dead," was inspired by a series of paintings by an American leftist and came out so well that, figuring that James Joyce wouldn't mind, I gave it the title of what may be the single most famous short story in the English language.

Now the UK publisher Orbit has acquired rights to the anthology and will be issuing a digital edition in the United Kingdom and their export markets (including Australia & New Zealand) one June 13th.

So for e-readers in those countries, the decision whether or not to buy is an easy one:  If you like zombie fiction, you want this book.  But if you don't, I fail to see how you made it this deep into today's blogpost.


Above:  That's the American cover.  The Brit cover can be found over at Amazon.  And wherever fine UK ebooks are sold.

From another Zombie author, welcome to the party, Michael ; )

Though my own modest contributions to a long running George R Romero fan site; Homepage of The Dead, are over ten years old now, new fans keep rising up to let me know that the Hungry Dead are still Hip.

'What had started as the Summer of Love, ended with a Fall which took an already torn national psyche and fed it; bit by bit, to a collective which honored no flag nor philosophy, save one.'

Deadfall. Fools on The Hill