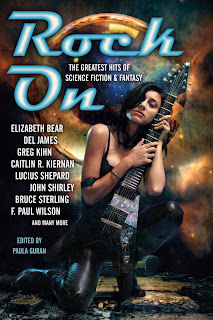 Another rock and roll anthology, you ask?  No!  Believe it or not, Rock On is the very first anthology of rock and roll science fiction stories ever published.

Not that people didn't try.  I know some very talented anthologists who busted their humps in the Seventies and Eighties and Nineties trying to sell just this book.  Up and down the publishing houses of New York, the response was, "There's no market for stories about rock and roll."

Now, a mere sixty years or so after the birth of rock, Paula Guran has managed to sell the book that nobody else could.  I'm in it, of course, because way back in the day when I was starting out, a science fiction story about rock and roll was an extremely difficult sale.  I was lucky  that  Robert Silverberg was enough of a wildman to buy "The Feast of Saint Janis" for his New Dimensions series.  But Howard Waldrop's flat-out brilliant (you doubt me? it's in the book) "Flying Saucer Rock and Roll" languished for years while its partisans talked it up to editors who knew for a fact that rock and roll was just too weird for science fiction, until finally Gardner Dozois became editor of Asimov's and snatched it up.

I won't go into detail about this book.  It has most of the stories I would have chosen, and the mere titles of some of them carry me off to the long-lost Lyonesse of my youth.  Here's Lucius Shepard's "How My Heart Breaks When I Sing This Song . . ." which was the first hint I ever had, back when rock and roll ruled the earth, that there was corruption in its heart and winter was coming.  And here's . . .

But never mind that.  If rock and roll is your drug of choice, you'll never find a surer buy.  You want this book.

I'll be announcing my secret project in only a few days.  Don't touch that dial!

Cool. I hope there is Karl Edward Wagner's "Did They Get You To Trade" in it, too. Bitter stuff, but beautiful sung.

It's also, iirc, UK-only, long OOP, and dearly in need of a US equivalent. So Well Done!

I confess to not having seen IN DREAMS. It was labeled as being "a celebration of the 7-inch single." Which sounded a little specialized. Were all the stories about rock and roll?

(And if so, how could they have failed to include something of mine?)