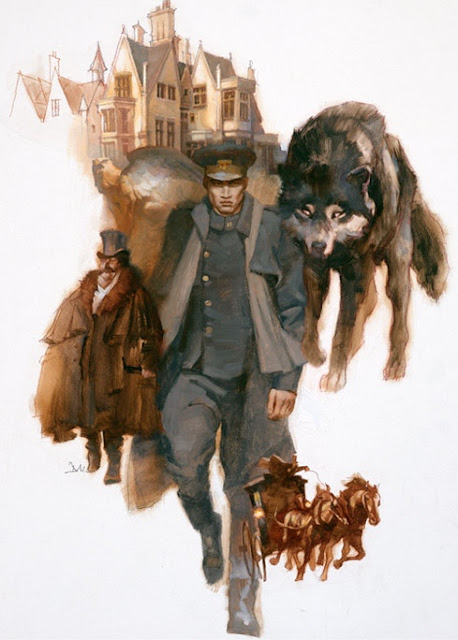 Big news today.  My new story, The Mongolian Wizard, is up on Tor.com.  As you might be able to guess from the cover illo, it's a Ruritanian fantasy set in "a fractured Europe that never was," as whoever writes Tor's intro material puts it.  You can also most likely guess that it's meant to be first and foremost entertaining, that it's an adventure story, and that it has a dark edge to it.

Right now, in fact, I have the shape of the entire series roughed out in in my mind.  I know how it's going to end and what major plot twists will occur along the way.  I even know who the mysterious visitor in the final adventure will be.

Does all that sound like I'm pushing this story hard?  I am.  I want everybody to love these stories and these characters as much as I do.  Just to keep the pressure on me to write more.

But decide for yourself.  War is brewing in Europe and all the greatest wizards of the continent have gathered together to try to stave it off . . .

You can read the story here.


And speaking of the illustration above . . .


Illustrator Gregory Manchess has done a fantastic job of not only picturing the characters as I saw them myself, but of conveying  the mood of the story and indeed the feel of the entire series.  Mostly, though, what it does is let you know if this is the kind of story you want to read.  If the picture makes you hope that "The Mongolian Wizard" is as good as it is, you'll almost certainly like the story.  But if it doesn't look like your sort of thing, you can pass it by with a clean conscience.

The world and characters have already captured my imagination too! I cannot wait to read more.

Excellent beginning. You are envisioning a series of short stories, I take it, and not a series of chapters of a new book? Either way, I look forward to each new installment.--Mario

Bit by bit the uncollected Swanwick stories are starting to build up. Are there any plans for a new collection?

Er, I mean the illustration reminds me of the covers of those books.

The stories are all going to be stand-alones. But in an order that tells a longer story.

I'll be putting together my next story collection as soon as I have enough new fiction to fill it. The problem is that I've gotten a lot terser in my old age. My preferred story length went from 11,500 words to 7,500 and now it appears to be around 5,000. I have no idea why this should be. None, as Avram Davidson used to say, whatever.

I enjoyed the first installment, and I look forward to reading the forthcoming related tales. And the artwork truly is gorgeous!