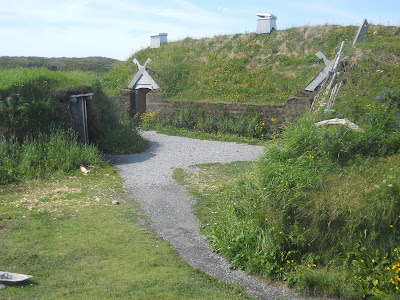 Thorfinn Karlsefni, we are here!

The first thing you need to know about L'Anse aux Meadows is that it's not pronounced in the French manner.  Properly, it's Lance-a-Meadows.  Our guide, in fact, told us that when he was a boy, they pronounced it Lancy Meadows.

The second thing you need to know is that it's exhilarating to be here.  After the mandatory information center and a rather good orientation film, we were taken down to see the site of the first Viking settlement in North America and could see the reburied mounds that the children fifty years ago thought were Indian ruins.  Then we went to a reconstruction of several of the buildings, where an interpreter ably guided us through an understanding of what we were seeing.  Finally, rather than retrace our steps, Marianne and I and our friends Gail and Rob, took a long nature walk along the ocean and through the bog.  If this place weren't so far from the centers of population and so difficult to reach, it would be thronged with people.  As it is, only the determined and thoughtful make it all the way here.  So it's quiet and the folks you encounter are to a person likeable.

I should mention that Clayton Colbourne was the single best guide I've ever encountered.  He was modest, assured, humorous, had a great presentational style, and knew his subject inside-out.  Which is not entirely surprising, because he was living here at age eleven when the Viking remains were first discovered and later had a job excavating the site.  I've listened very carefully to a lot of extremely good guides in my time, and he was the most punctilious in indicating what was known, what "scientists believe," and what is speculated.

Which is all very useful to me because I hope to get a story out of this.

Much later, after various further wanderings and adventures, we all returned to Viking Village, our B&B, for a moose pot roast dinner.  Which cost us extra, of course  -- sixteen dollars per person.

I am convinced that if everybody knew what a good deal a visit here is, market forces would raise the price beyond what I could possibly afford.

Above:  Reconstruction of what they think was Leif Erickson's house.

Looks like a slightly derelict Hobbiton! It should have some dwarves with horned helmets roaming the streets, singing with bottles of Screech in one hand. That must be a thrill; We've always wanted to see it.

My guess is Kim Stanley Robinson's 'Vinland the Dream' isn't a popular reading selection there.

Thinking of KSR, his 'Short History of the Twentieth Century With Illustrations' is one of the tiny number of stories that resonate with me forever. Reading about the Viking settlement brought it to mind.

I haven't read 'Vinland the Dream' but I managed to find a precis of it on the web. He's definitely coming from a different direction there :)