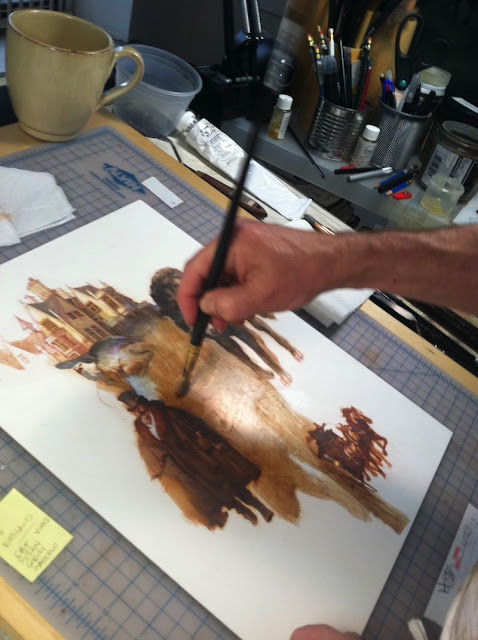 Artist Gregory Manchess has posted an illustrated account at Tor.com of how he created the cover illos for my first two Mongolian Wizard stories.  Dear God, the the art director worked him like a horse!

But, from my perspective at least, it was worth it.

I have a superstitious belief that certain stories are fated for success, and that this begins with their getting extraordinary art.  The Jeff Jones covers for Ace Books' reissue of Fritz Leiber's Fafhrd and the Grey Mouser books comes to mind, or the painting that James Gurney did for the issue of F&SF with Lucius Shepard's original Dragon Griaule story.

So, too, I dare hope, for the adventures of Ritter and Sir Toby.  They have a hard war and my own high expectations ahead of them.  But getting two such illustrations at their outset seems a good sign.  I intend to take it as an omen.

I was struck by how vivid and filled with movement Manchess's first sketches were.  Then by how each change and artistic decision made the paintings better.  It's a glorious thing to watch a professional at work.

Particularly when you're the one who ultimately benefits from it.

You can view the entire article (and it's well worth viewing) here.

And speaking of Amos Tutuola . . .

As I'd hoped, I learned a lot at the Readercon panel on Amos Tutuola.  But what knocked me out was how not-full-of-himself fellow panelist Jeff VanderMeer was.  As a spin-off, apparently, of his and Ann VanderMeer's telephone-directory of an anthology, Weird, the VanderMeers have been working with Yinka Tutuola, the great writer's son and the manager of his literary estate.  Among other activities, they've assembled an e-book of uncollected Tutuola stories titled Don't Return Bad for Bad, forthcoming soon from Cheeky Frawg.  And Jeff conducted an extremely valuable interview with the younger Mr. Tutuola, which greatly expands our understanding of the writer.