FRIDAY'S POST: In Which I Am Absent But Happy 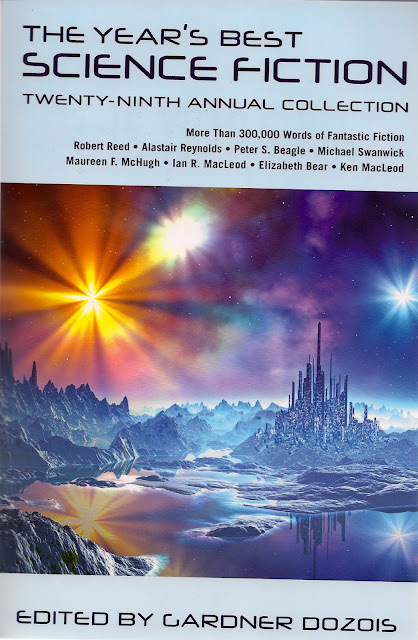 Before I left for a science fiction convention Friday, I carefully wrote a post -- and then didn't put it up!  Typical.  Here's what you missed:


Look what came in the mail yesterday!  One of my genuine accomplishments is that I have reached a stage in my career where inclusion in a best-of-year anthology is so common that I don't bother to keep track of them anymore and so never have any ideas how many include my fiction in any given year.

So it was a pleasant surprise to find that I'm included in The Year's Best Science Fiction: Twenty-Ninth Annual Collection, commendably edited as always by Gardner Dozois.  Doubly pleasant to look inside and discover that I have two stories included.  So to mark the occasion, I'll tell a very brief anecdote about each.

The Dala Horse was of course inspired by the brightly-painted wooden toy horse that has, almost inexplicably, become a symbol of Sweden.  It's always a surprise to foreigners to find that it was a nineteenth-century invention and has no mythological or folkloric story behind it.

When I was in Sweden for the 1999 Swecon, I bought one, intending to find its story and write it.  Which, only slightly more than a decade later, I managed to do.  Swecon was a great success that year and the con committee invited me to their pub meeting the night before I flew home again.  Midway through a very pleasant evening, I took the small red Dala horse I'd bought out of my pocket.  A silence fell over the previously=noisy table.

Finally, one of the committee members cleared his throat and said, "My . . . my parents have one of those."  And changed the subject.


For I Have Lain Me Down on the Stone of Loneliness and I'll Not Be Back Again had its roots rather earlier, when I was in Dublin one Sunday, minding my own business on O'Connell Street, when Gerry Adams walked right past me.  One his way, I later realized, from a speech at the General Post Office commemorating the Easter Uprising in 1916.  But its immediate cause was a song by Janis Ian titled Mary's Eyes.

Sad songs about Ireland (and are there any other kind?) are my Achilles heel -- the only things, other than my family, that can make me cry.  Janis put together an anthology of science fiction stories "inspired by," as they say, her songs, and I tried hard to finish this one in time for inclusion.  But it was far too personal and far too tricky for that.  So it got finished when it did, which was long after the book came out.  I sent her the original manuscript in way of apology, figuring she could throw it into her Pearl Foundation auction, and that was that.

A year or so ago, though, Janis made an appearance in my area, so I went to see her.  During the concert, she played Mary's Eyes and called me out in the audience.  Alas, my eyes were filled with tears, and I could not see to stand.

I'm on the road again.  This time to Burlington, Massachusetts, for Readercon.  If you're there, say hello.  You won't be interrupting anything important.  Just a batch of panels and such.

Good to see you there; had a rather Swanwick-related Readercon, opening with your lovely wife, Marianne, passing on some great information about her China experience and closing with the glorious Kyle Cassidy and Trillian Stars being the audience (and sounding board) for my presentation-in-process.

So when are we going to see your review of the new Shepard story?

Even unread,it's a pretty safe bet that the story rocks.