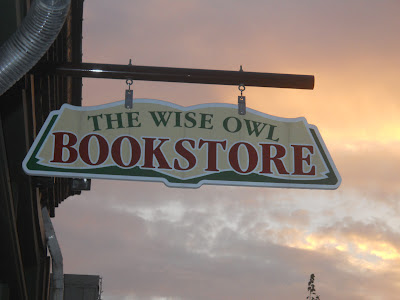 One of the best pieces of advice I have for gonnabe writers is this:  While you're still unpublished, go to lots of readings and public appearances by writers you know are good.  That way, when it's your turn and almost nobody shows up or the audience is sullen and unappreciative you'll recognize it as normal and won't slit your throat.

This advice would have been useless, however, at my reading at the Wise Owl Bookstore in West Reading, PA, this past Wednesday.  The store was packed and the audience was both appreciative and very smart.  So I had a lovely time.

What made the evening, though, was that I was wise enough to show up early for the open mic hour, when local writers and poets get up to read from their work.  It's been many years since I last did that, and I'd forgotten how much fun such events could be.  Listening, one can hear where the writers are on their pilgrimage:  Some just setting out, others just making their first sales, one or two at that point where everything comes together.  And occasionally, something very fine indeed is read.

The event was conducted with aplomb and good grace by Sue Lange, and fterward, most of us retired to a nearby restaurant for food and talk.  If you're in the area for one of these events, I highly recommend it.

Apollo 11 landed on the Moon forty-three (dear God! can this be true?) years ago today, on July 20, 1969.  It was an astonishing accomplishment which I stayed up late to watch live on black-and-white television.

In retrospect, it was madness to attempt to reach the Moon with the primitive technology available back then.  But as it turns out it was the wise thing to do.  Today we have the technology but not the will.  If we'd waited, the deed might still remain undone.

Thank you so very kindly for attending our Local Author Open Mic Night as our featured speaker! It was such a great evening, and your talent and insight was enjoyed by all. Many thanks!