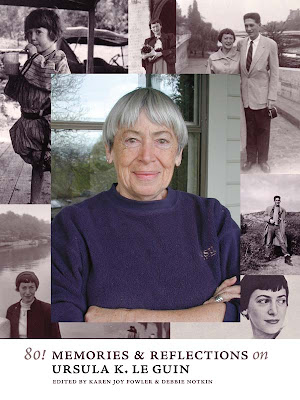 This came in the mail the other day.  80! Memories & Reflections on Ursula K. Le Guin is a festschrift for the woman whom I suppose we shall now have to refer to as the grande dame of fantasy.  And of course ...
But wait, I hear some of you say.  Festschrift?
Fairly asked.  A festschrift is a collection of writings, a book, celebrating a particularly valued individual and presented to him or her while said luminary is still alive.  (If the book were gathered and published posthumously, it would be a gedenkenschrift. )  Because it's so much trouble to put together, it's normally reserved for people who are both outstanding in their chosen profession and greatly beloved.
Le Guin was about to turn eighty, and her friends got together to present her with exactly such a literary beast.  It contained stories, poems, essays, and front-of-church testimonials by such luminaries as Eileen Gunn, Gwynneth Jones, Karen Joy Fowler, Kim Stanley Robinson, Ellen Kushner, Nancy Kress, etc., etc., etc.  In the wake of what was probably a pretty good party, it's been published by Aqueduct Press, and members of the general public are allowed to buy and read it.
Now, either you want this book (I did and now I have it) or you don't, and you already know which camp you dwell within, and no amount of descriptive analysis will budge you one way or the other.
So I'm not going to review the book.  Why bother?

However, I was inspired by Lisa Tuttle's heartfelt contribution, "'From Elfland to Poughkeepsie' and Back Again, or, I Think We're in Poughkeepsie Now, Toto," on how important a single seminal Le Guin essay was to her, to go back and revisit said essay.

I've been meaning to reread "From Elfland to Poughkeepsie" for some time now.  It came out in 1973 when genre fantasy was a new phenomenon.  I read it shortly thereafter and was blown away by it.  "Yes!" I thought.  "She gets it!"  We were all just figuring out this new (though most of the texts worth reading were half a century old by then) phenomenon, and a lot of very silly things were being said and thought and written about it.  Le Guin's essay was not silly.  She understood fantasy and why it should be valued and she said some things that were very valuable to a young, unpublished writer who aspired to write the stuff himself.

Over a third of a century has passed, and there have been some remarkable changes.  I wondered how well the essay held up.

Unfortunately, I'm currently all on fire to work on "The Stone of Loneliness," a story I began several years ago and which suddenly and unexpectedly exploded back into life yesterday.  So I haven't the time to write down what I found out today.  I'll have to tell you tomorrow.

In the meantime, allow me to leave you with the three most terrifying words ever found at the end of a fantasy novel or, indeed, a blog post:

I knew what a Festschrift was but have no idea what is meant by a "front-of-church testimonial." Do Christians actually stand out front of churches and deliver encomia for their idols? What if it's raining? They should be allowed to go inside.

No, no, no, they go up to the altar in front of the congregation. And of course not all Christians do this. It's a low church kind of thing. Catholics and Episcopalians would find it pretty embarrassing.