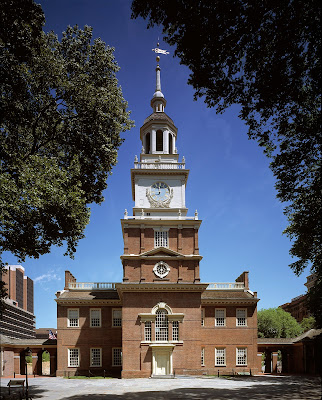 Remember the 6000 Salad Bowls scene in The Return of the Secaucus Seven?  Every town in America has that one odd or distinctive place that serves as a local landmark.

I live in Philadelphia.  Here's ours.  We call it Independence Hall.


And for Independence Day, a story featuring a great American writer . . .


WWKVD?
by
Michael Swanwick
Listen:  Stephanie Barnes has come unstuck in time.  One minute she’s a teenager just starting her first summer job.  The next she’s a very old woman lying in a hospital bed, dying.  Small wonder her favorite author is Kurt Vonnegut.  She buys copy after copy of Slaughterhouse Five and then reads them to pieces, looking for clues to how to handler her predicament.
The breath catches in her throat.  This is it, she realizes, I’m dying.  Then suddenly she’s a senior in college, taking her final exam in philosophy.
Kill me now, she thinks.
Hours later, she staggers out of the classroom, determined to finally do something about her predicament.  But what?
Well . . . what would Kurt Vonnegut do?
He’d ask advice from the wisest person he knew of.  Walking across campus, hands clasped behind her back, scowling with concentration, Barnes plots out how to do this.  First she has to learn all she can about Vonnegut’s public appearances, their exact dates and locales.  When she’s old, she can look up all the information on the Web and memorize it.  Then, when she’s young . . .
Thus it is that a ten-year-old girl, playing hooky from school to attend one of his readings, stands up during the question-and-answer period and carefully recites the titles of all of Vonnegut’s future books, including the one he is currently writing, says, “Remember me,” and quickly slips away.  Years later, a young woman at a similar event, says, “Last time I saw you, I told you what books you would write.  This time . . .”  And she tells him events that will happen to him in the next ten years.  A decade later, a woman stops him as he’s leaving the venue for yet another appearance and says, “This is the third time I’ve seen you.”
He recognizes instantly.  “Why are you doing this?” he asks.  “Who are you?”
“Someone who needs your help.”
They go to a coffee house, where Barnes tells him her story.  When she is done, Vonnegut is silent for a very long time.  Then he says, “I’m only a writer, you know.  I have no special insight into the laws that run the universe.  Only, perhaps, a stronger awareness than most of their absurdity.  Life can be a painful business, and there’s no Complaint Department where you can go to register your discontent.  So it seems to me that the most you can do is to try to live it with as much dignity and integrity as you’re allowed.”  He spreads his arms helplessly.  “That’s all I got.”
Barnes goes away.  It’s not the answer she was looking for.  But it makes her feel oddly better.
Shortly before Vonnegut’s death, she shows up at what might well be his last public appearance.  Vonnegut, seeing her, climbs down from the dais.  He can see in her eyes that she’s used up all of her life, and that from here-and-now it’s but a quick jump forward to her final and very real death.  He takes her hands in his and, leaning close so no one will overhear, he says, “Tell me.  What have you learned from all this?”
Barnes thinks seriously, trying to condense a strange lifetime of experience into a few brief words.  Finally she says, “We live, we do the best that we can – and then we die.”
Vonnegut smiles sadly and then kisses her on the cheek.  “Well,” he says, “at least we’re on the same page.”
*
Posted by Michael Swanwick at 2:40 AM

By reposting time-travel stories, you seek to draw us all into the loop?

No matter. I'll edit a new story into today's blog this afternoon.

I loved this little story.

And so it goes.