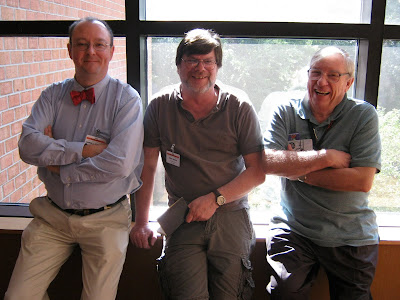 Above:  Just a random encounter at the convention last weekend.  L-r:  James Cambias, Allen Steele, and Jack McDevitt.  Who, come to think, would a great team of protagonists in an action-caper flick.    Allen would get to do all the martial arts stuff, of course, because he has the cool last name.  Which, I gather, has been something of a minor burden for him.  He's apparently spent most of his life saying, "No, it's my real name, honest."

My son's friend Ben Stryker had the same problem.

These guys are real good company, though.  I like spending time with 'em.

And because the Clarion West students have no rest . . .

Hobo Jeweler
by
Michael Swanwick
Holly Deitz rolled off a Great Southern freight train on the edge of town, found the hobo jungle, and swapped a brooch she’d crafted from a discarded sardine tin for some slumgullion cooked in a coffee pot over the communal campfire.
“You sure got a lot of jewelry on you,” Whiskey Jane said, when the eating was done.
“That’s my craft.  I’m a jeweler.”
Slick Edna held up a stogie.  “Swap ya a five-cent cigar for a ring, Jeweler.”
Everybody laughed.  But Deitz took the cigar, slid off its band and slipped it onto the hobo’s pinky finger.  “Done.”  She took the cigar, bit off the end, and lit it with a coal held between two twigs.
“So whatcha doin’ riding the rails?” the Kenosha Chick said.  There was a mean glint in her eye.  Deitz more than half suspected she was a bindlestiff.  “When you could have a career in the city, fitting rich bitches with diamond-studded thongs.”
“I like to travel and I like to make things.”  Deitz flexed her fingers, wishing it were light enough to get out her tools.  “This way I get to do them both.”
“No skin off my nose, Jeweler.”  The Kenosha Chick wrapped her blanket about her and lay down on the ground to sleep.  “But you’re a damfool and no mistake about it.”
Time passed.  Sometime past midnight something caused Deitz to waken out of a sound sleep.  There was a shadow crouched over her bindle.  Going through her tools and the small stock of materials she carried with her.
“Hey!”  Deitz was on her feet in an instant.
And on her back in another, smashed flat by the Kenosha Chick’s fist.  “I said you was a fool.”  She grinned nastily, and drew an enormous knife from her belt.
Deitz spread her hands, as if in surrender.  “Listen, we can talk this through, gal to gal.  We’ll –”  She flicked one wrist just so, and her derringer snapped into her palm.
She had just enough time to get off one shot.  It was all she needed.
In the aftermath, all the hobos in the camp came swarming up to see what had happened.  They found Deitz standing over the Kenosha Chick’s corpse.  She reloaded her derringer and carefully replaced it in its snap action holster.
“I told her I liked to make things,” Deitz said.  “But this fool thought I only meant jewelry.”
*
Posted by Michael Swanwick at 1:49 AM

I am speechless! Thanks so much for making me one tough broad! :)

Wait, does she mean she also makes guns, or corpses? Take your pick?