Phil Klass, William Tenn, and A Sailor of the Inland Sea 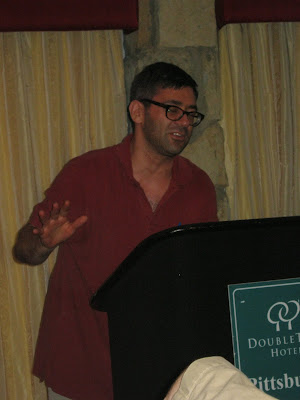 I'm blogging live from Confluence, which is shaping up to be a good convention.  Friday  night there was a memorial service for Phil Klass with excerpts from filmed interviews and a documentary-in-progress, memorials from his extended clan (almost all of whom are writers!  there may be something to this genetics stuff), and testimonials from students, friends, and others whose lives were touched by the man who wrote as William Tenn.


As I grow older and lose more and more friends and valued colleagues, I find that what I miss most about them are their voices.  Phil was a raconteur who told funny stories with raspy voice, using Yiddische schtick.  It was a strangely musical mode of storytelling that can best be compared to the saxophone.  Not everybody can play the sax but its sound is instantly recognizable and we can all instantly tell the difference between good and bad sax.  Phil played his metaphoric saxophone like a virtuoso.


James Morrow MC'd the memorial with grace and modesty.  It was a deeply moving event that left everybody feeling happy and  grateful for Phil's presence in our lives.


Yesterday's tuckerization was the first commissioned by an unborn child.  Well, technically, Sagan's Mom bought it.  Still, it was a bit of a challenge writing for such a young audience.
Sagan has a five-year-old brother who will also get a tuckerization.  Not tomorrow, though.  Sometime in the coming week.

A Sailor of the Inland Sea
by
Michael Swanwick
When Sagan Hanna was very young, he lived in a small warm sea, next door to a much larger one with palm trees by its beaches. In the soft warm salty darkness he talked to the stars and the clouds and the flowers lying yet unborn in their seeds. He floated like a jellyfish and he didn’t need to breathe. Sometimes he talked to his mother as well.
What they said to each other was not said in words but in feelings. They understood each other too well to have need for words.
One day a great sense of sadness passed over Sagan’s universe like a storm cloud and he knew that his mother wanted something she couldn’t have. So he imagined a boat with a yellow hull shaped like a crescent moon with a big red triangle for a sail and went to look for it. In his imagination, he sailed to the farthest reaches of the Alethan Sea.
There he found an island, green and sunny. On it stood a man with a circle for his head and dots for his eyes and four sticks for his arms and legs. The man waved happily, so Sagan unimagined the boat, and let the man pick him up and hold him in those skinny stick arms.
That was pleasant. But Sagan didn’t forget the reason for his journey. So he imagined he could talk.
“Are you what my mother wants?” he asked.
“Yes,” the stick-man said. “I’m your father and our mother misses me because I’m away on a business trip.” He had a great big silly loopy smile on his face. “But feel that!” All the world grew bright with joy. “I just walked in the door.”
And then his father threw him up in the air and caught him and up in the air and caught him and up in the air and . . .
This was a dream that Sagan had when he was very little. It has no proper ending because he didn’t know yet how to make up a story. But he would learn.
By the time Sagan was a grown-up, he would know everything in the world.
*
Above:  Gordon Van Gelder expounds on the many (and sometimes frustrating) virtues of Phillip Klass.
Posted by Michael Swanwick at 1:29 AM

Sagan was born yesterday. Thank you!

Sagan's BROTHER Merrick is excited about his impending fame.

Correction made. My thanks. No idea how my notes got so confused.

And Happy Birthday, Sagan! Welcome to the world. You'll like it.

I read this story the day we brought Sagan home from the hospital and it brought me to tears. It's magical and perfectly sweet.

I'm gratified that you liked it. I put a lot more thought into this story than pretty much any other. It's not easy writing for a child that young.