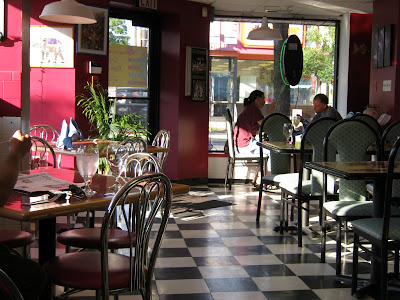 Gardner Dozois is one of the nicest guys in the world, and a good and true friend for something like thirty-five years.  But he does have his quirks.  One of which is that he's convinced that I live in the suburbs.  My house is half of a duplex, it has no front yard, and it's deep within the boundaries of Philadelphia.  No matter.  I don't live in Center City and that means I'm out in the 'burbs.  As far as Gardner's concerned, South Philly, the Greater Northeast, Chestnut Hill, Fishtown, the Liberties . . .  anything that isn't Center City is the suburbs.

Well, I now have proof that I do so live in the city.  The Tang Thai Restaurant just opened up on the corner yesterday, and Marianne and I were among the first to order take-out.  It was all excellent and the spring rolls were a revelation -- light and crisp on the outside, delicious on the inside.  They made me realize that I'd never had decent spring rolls before this.

And it goes without saying that it would be a very strange suburb indeed that had a Thai restaurant just four or five houses down the block from you.

Swiss Army Hair
By
Michael Swanwick
– It’s a wig, it’s a hat, it’s a sun visor!  It keeps off rain, it cushions the skull, it deflects dust and dandruff!  It’s . . .  Swiss Army Hair!  Here to tell us about it is Andy Burton.
– Thanks, Jim.  As you know, the first Swiss Army Knife was made in 1897 and Konrad Zuse’s Z3, the world’s first electronic fully programmable computer, was created in 1941.  Yet it wasn’t until this very year that somebody thought to combine the two innovations with modern grooming technology.  It looks natural, too!  In fact, I’m wearing one right now.
– I thought that was your real hair.
– I wish, Jim!  Now tell me what color my hair is.
– It’s brown, Andy.
– And now?
– Wow!  Look at that – it’s bright orange!  No, it’s blue!  I mean red!  It’s cycling through all the colors of the rainbow.  I’m guessing that ought to come in handy when you want to change hair color.
– You bet it will.  But that’s not all that Swiss Army Hair can do.  It’ll serve as a burglar alarm while you sleep.  It can get you up in the morning by gently tickling your nose.   It can also – here, let me lift up this plate of food – do this.
– It’s actually feeding you!  If you didn’t have to hold up the plate for it, that would save you a lot of effort.  I’m guessing that those tendrils can also wield gardening tools every bit as deftly as it does knife and fork.
– Yes, although you’ll need itty-bitty shovels and hoes and of course you’ll need to be limber enough to bend close to the earth.  So I’m thinking there’s not a great deal of market there.  However, with these clip-in hair extensions you can actually add new skill sets to your Swiss Army Hair.  This one combines martial arts and commando skills.
– That’s actually kind of scary, Andy.  It looks like that thing could do real damage.
– Yes, it knows seventeen different ways to kill a man.  Which would turn out to be pretty darn useful if you were attacked by ninjas – a possibility that grows stronger every day that the government delays building that wall along the Canadian border.  Now watch what happens when I add a second extension which gives it what we call “leadership initiative.”
–  It’s patting me down.  Now it’s removing my pocket knife from my trousers pocket.  That’s absolutely terrifying, Andy.
–  No, that’s synergy.  Incidentally, I wouldn’t make any sudden motions if I were you.  It sees you glancing toward the studio door.  I promise you, you wouldn’t get very far if you tried to make a break for it.  It’s best you simply do what it wants you to do.
– What . . . what does it want me to do, Andy?
– It wants you to wear Swiss Army Hair.  It wants everybody to.
*
Above:  The Tang Thai from the inside.  I'm thinking we'll be eating Thai food once a week far into the foreseeable future.
Posted by Michael Swanwick at 8:19 AM

Thank you! Thank you very much!

Is Thai food so uncommon away from the hub? At one time it seemed every other pub in London served Thai food, and my friend Mary had a Thai restaurant at the end of her road in Preston (a suburb of Melbourne).

(Now, I grant you that if every fifth property were a Thai restaurant, that'd be something.)

I'm out on the rim of London: if I walk one way, sheep & horses; if I walk the other way (though it is a shorter walk I'll grant you), an Iranian restaurant. Sadly, there's no fancy geometry to place me both at the centre and the edge of things: my suburb remains a suburb.

I'm too frightened to comment on Swiss Army Hair, but I'm staying well away from wigs from now on.

Canadian ninja: it has been suggested to me that denizens of the USA find Canada & Canadians intrinsically funny. Surely, this is not true. Tell me it is some kind of meta-joke in which Americans find funny the idea that Americans find Canadians funny.

I understand that a Canadian think tank is analysing the sitcom How I Met Your Mother. Meanwhile, the ninja are massing at the border, awaiting copies of the report.

I think even Canadians find Canadians funny. They seem to have no problem juggling the paradox of staunchly defending their cultural independence from the US while at the same time laughing at how absurd this can seem at times.

I do wish mean old blogspot would let me edit comments - that last 'deleted' one is just me bumping the keyboard and posting a not-very-useful string of nonsense characters.

> And it goes without saying that it would be a very strange suburb indeed that had a Thai restaurant just four or five houses down the block from you.

I'm a bit confused here - I'd think that describes a reasonably normal suburb, at least in Melbourne. In newer outer suburbs which were built as housing developments in one big chunk, it can be pretty hard to find decent amenities, but in any older medium distance suburb I'd expect to find plenty.

Right now I live near an almost uncountable number of Turkish and Lebanese restaurants. In previous houses I've lived near good Thai places and great Burmese ones. Are American suburbs so very different?

Regardless, it is good that you have access to excellent food.

"... defending their cultural independence from the US ... laughing at how absurd this can seem at times."

David, is it absurd to make the attempt at independence? If it is not true that in everything they succeed in maintaining independence, doesn't that just put them in the same boat as every other country?

(Not that cultural influence is never exported from non-US countries, nor that the USA never imports culture.)

The East Coast of the States is not exactly a hotbed of Thai restaurants. I'm pretty sure that there are several in Philadelphia. But if you go out into the burbs and want Thai, you'll have to drive to a mall and find a Chinese steam table buffet restaurant -- that's as close as you'll get.

Plus, once you get out into the counties, the zoning laws are set up to prevent restaurants opening anywhere within walking distance of residences. It would bring down property values, you see.

And as for the humorous quality of Canadians . . .

Down South here, Canadians are seen as being hard-working, essentially decent folks who, if they saw you lying on the ground bleeding, would stop to give you a hand and probably wouldn't lift your wallet in the process.

So where making out Americans to be monsters of evil is insulting, the same charges leveled against Canadians is inherently funny. Because everybody knows it's not meant seriously.

Canadians HATE that, incidentally. They despise the stereotype that they are all nice guys.

If there's a restaurant within walking distance, the property is worth less, not more? Because Philadelphia is on Bizarro World?

Let me guess, good schools & hospitals bring property prices down, too. I knew I should have taken economics!

You're on your own on the Canadian thing, I'm afraid. I'm not fence-sitting, I'm on their side.

Try replacing "Americans" with "men" and "Canadians" with "women". Starting to anticipate the attack of the feminist ninja?

> Plus, once you get out into the counties, the zoning laws are set up to prevent restaurants opening anywhere within walking distance of residences. It would bring down property values, you see.

That humming sound is Jane Jacobs rotating in her grave. The chief value of older inner city areas is that they're truly mixed use.

I saw an interesting zoning law abberation the other day - not far from my house, down a side street near a shopping strip there's one of those children's indoor play centers - right next door to a strip club. From a certain angle you can see the logic...

"... one of those children's indoor play centers - right next door to a strip club."

If you're going to allow strip clubs, either allow them anywhere, or restrict them to the places they'll cause maximum embarrassment (to misogynists & hypocrites). The areas-of-designated-sleaziness approach has no appeal.

Yeah, most Canadians don't like being reminded that we're generally nice. The jokes that make us look dangerous, however, often mean a different thing to Canadians than to anyone else. Everyone else laughs at them, as being ludicrous. Canadians instead often smile at the idea of being dangerous, for once--if just for novelty's sake.

"Everyone else laughs at them, as being ludicrous."

Well, I can't speak for the world, but I think it's safe to say that the British think that the denizens of the USA's conviction that Canadians are funny indicates a national sense-of-humour malfunction.

I suspect that in comedy hell, the Canadian jokes share a circle with the Irish jokes, the Polish jokes, ... well, you get the idea!