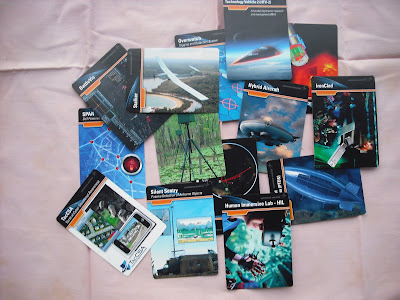 "Have you seen anything here that hasn't appeared in a science fiction story?" somebody asked at the end of the Sigma panel.

There was a brief, embarrassed silence before one of the writers allowed as how none of it was new to us.  Then I said, "You have to understand that if you and I have the same idea, you've got to come up with proof of concept, work up a prototype, and come up with a marketing strategy.  All I have to do is write, 'And it worked.  So we acquired funding and went into production.'"

The World's Best Technology Showcase is one of those odd events, peculiar to our times, designed to bring together venture capitalists and innovative technology entrepreneurs.  Everybody had booths, though a lot of the time they were unmanned, and all the hungry young innovators got six minutes in front of a small group of potential investors to state what their product was, why it would fill or create a need, how much money they expected to make and how soon they'd make it, and how much money they were looking for (as a rule, either five hundred thousand dollars to cover the next two years of development or five million for the next three years bringing the product to profitability).

I liked much of what I saw, but the notion that pretty much all the science fiction writers present were most taken by was Hypios's scheme for harnessing crowd-sourcing for commercial problem-solving.   They take a problem a corporation needs solved, and then make it available to a cloud of experts around the world, offering a cash prize for a solution by a given deadline.  They present any successful solutions to the corporation which either buys it or walks away without spending any money.

It's an extremely tidy notion.  Cheap and simple for the corporations and a good way for bright people to pick up a little extra cash without worrying that their ideas will be simply ripped off.

It reminds me of the solution that Bill Gibson came up with for the old cyberpunk-assassin problem.  Back when the whole C-word thing was hot, I read any number of imitation Gibson stories which came smack-dab up against the same problem:  An assassin has just killed somebody for the Evil Corporation.  How does he get paid when it's simpler for the EC to simply off him?

Bill's solution was typically elegant.  In (I think) Mona Lisa Overdrive, an assassin accepts an assignment and then says, "Call my agent to work out the details."

The Hypios model seems sound to me.  But I think its real value is going to come when the software and/or basic notion gets into the hands of nonprofit do-gooder organizations.  Solving problems of health, sanitation, and poverty in emerging nations not for money but simply for the satisfaction of having made a difference.  I look forward to that.

Canadian science fiction writer Peter Watts has been found guilty of mouthing off to a U.S. border agent.  During the trial it was apparently established that he did not attack, strike, or attempt to choke anybody during the incident.  But in our nation you can be legally charged with failing to obey a Federal officer with the desired alacrity.

Watts' crime was that of being insufficiently servile.

Here's what the terrible Canadian threat to American security had to say about the trial:  "While I think they made the wrong decision I'm obviously not the most impartial attendee at this party.  I still maintain I did nothing wrong; but as far as I can tell the trial was fair, and I will abide by its outcome.

If I may quote Thomas Jefferson, I tremble for my country when I reflect that God is just.

You can read Watts' account of the trial here.

Above:  Just a few of a deck of promotional cards that Lockheed Martin (one of the sponsors) stuck in the gimme bag.  I'm going to keep them handy to remind myself that none of this stuff is science fiction anymore.

Back when the whole C-word thing was hot

It is a curious thing that the C-word has become a bit passe, I think, in the world at large (what next, cruising on the information superhighway?) but not so within the U.S. military, which uses the C-word all the time without any retro feel.

Good God, do they really? I'd thought that the military, being engaged in reality every day in the form of bullets and IEDs, would be more in touch with the current moment.

Protestant ministers, however, were for decades the last repository of Sixties slang. It wasn't that long ago that you'd see signs outside churches advertising sermons with slogans like "Get Down with Jesus." They would've been easy targets for satire had it not been for the fact that they meant only good.

On reflection, I should admit that more recently popularized words such as "Internet" or "web" are not always apt for the military hacker, who may often be interested in infiltrating, or defending, protected computer networks partly or wholly distinct from the Internet used by the general public.

So perhaps the C-word is still quite a good one for their purposes... No sufficiently generic replacement has been coined to supplant it.