A Weekend of Conversations 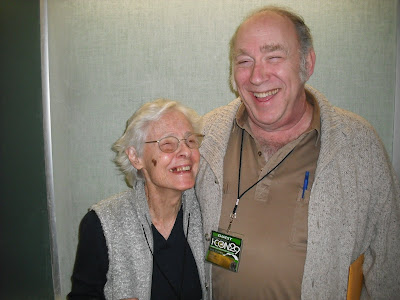 I spent the weekend at I-Con in Stony Brook, New York.  It's essentially a media-and-gaming con with a literary track.  I was on a lot of panels, appreciatively received if somewhat sparsely attended.  But mostly I was there for the conversations.

I listened to Mike Resnick and Rob Sawyer match Hollywood horror stories.  Chatted with Jim Frenkel about promising new writers he was editing,   Talked with Jack McDevitt about the Phillies.  (We're both Philadelphians, though I was born elsewhere and he moved away.)  Swapped stories about writing fast-and-to-order with Bill Fawcett and Jody Lynn Nye.  Heard Carol Emshwiller talk about her cowboy novels and talked Samuel R. Delany about his plans for the future.

Saturday evening, Paul Barnett (who sometimes writes under his own name and sometimes as John Grant) and Pam Scoville, his wife, very kindly gave me a ride back to the convention hotel, and we proceeded to have an hour-long and rather jolly conversation about exactly where we were and how lost three people could manage to be.

And on Sunday, Marianne and I went out to breakfast with Barry and Joyce Malzberg and talked about the history of science fiction, writers of merit, both in and out of the field, the Carle Museum, Maurice Sendak, Emily Dickinson, and the worst writer ever to make it onto the Hugo ballot.  It was only a sense of duty that dragged me out of the diner and back to the con.  I could have stayed there talking all day.

And the search for a title continues . . .

I estimate I have about six more pages to write before the novel is finished.  So at the moment I'm just dumping all title suggestions into a file for easy organization .  But the search is sincere, and I am genuinely grateful for all your ideas.  I'll be poring (and sweating) over them in just a couple of days.


Above:  My pals Carol Emshwiller and Mike Resnick.  What great smiles they have!

The Suave Dog: A Postutopian Contrivance

Scoundrel and Gentleman, Esq. or Darger and Surplus burn Moscow to the Ground.