Name My Novel! (And Win a Box of Books Too) 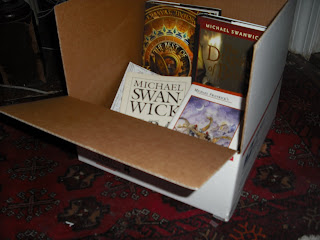 I'm into the final days of writing the Darger & Surplus novel and it still doesn't have a title!

This is a real problem because all the best novels (Neuromancer, The Moon is a Harsh Mistress, and A la recherche du temps perdu, to name but three) have titles, while untitled novels are quickly forgotten.  (Quick!  Name three!)

So I need a title and I'm asking for suggestion.

This is almost but not quite a contest.  It's almost a contest because I'm offering prizes.  It's not quite one because I can't guarantee that anybody entering will win.  The ultimate title might come from me or from Marianne or from Sean and his friends or from my editor.

But if it comes from you, I'm prepared to offer some serious schwag.


So what am I offering?

First of all, bragging rights.  I will not be shy about giving you credit.  You will be mentioned not only online but in the novel's acknowledgements.  When your grandchildren call your bluff, I'll be happy to email them with the truth.

Secondly, a copy of the novel itself, inscribed to you with genuine gratitude.  It won't be the first autographed copy (that's already been promised) but it will be one of the first three.

Thirdly and bestly, a Big Box O' Books.  I'll dig deep into the book closet and assemble a selection of novels, chapbooks, best-of-the-year collections, and anthologies.  Enough to fill a large-size flat rate USPS box (mostly empty above).  I'll do my best to fill it full of interesting stuff, and I'll check with you first to make sure I'm not sending you anything you already have.  (Unless you'd like it inscribed to a friend.)  Every book will be autographed.  If you'd like them inscribed, that too.

Finally, I'll include the original signed typescript of a short-short story (aka a flash fiction) with either your name or the name of somebody you designate as a character.  This is called a Tuckerization, after Wilson Tucker who liked to give shout outs to friends and colleagues in his fiction.  To the best of my recollection, I've never Tuckerized anybody.  So this will be a first (and probably last) for me.  I met Wilson Tucker once and was appropriately awed.


So what's the novel about?

Here's what I can tell you about the plot:

Sometime in the Postutopian era, Darger and Surplus, two talented con men, come to Moscow, hoping to pull a very big scam on the Duke of Muscovy.  This great man has dreams of resurrecting the Russian Empire and is, they discover, all but unapproachable.  Meanwhile, other forces (including the exiled demons of the Internet) are conspiring against the duke's rule.  Wolves are involved.  Darger and Surplus soon learn exactly how mean and dangerous Moscow can be.  But will they burn it down, as they did London?

That's a little cryptic, I confess, and terribly oversimplified.  But if I tell you more, I'll have to just start at the beginning and give you the entire story.

Oh, what the heck. Here's the opening:


Deep in the heart of the Kremlin, the Duke of Muscovy dreamt of empire.  Advisors and spies from every quarter of the shattered remnants of Old Russia came to whisper in his ear.  Most he listened to impassively.  But sometimes he would nod and mumble a few soft words.  Then messengers would be sent flying to provision his navy, redeploy his armies, comfort his allies, humor those who thought they could deceive and mislead him.  Other times he sent for the head of his secret police and with a few oblique but impossible to misunderstand sentences, launched a saboteur at an enemy’s industries or an assassin at an insufficiently stalwart friend.
The great man’s mind never rested.  In the liberal state of Greater St. Petersburg, he considered student radicals who dabbled in forbidden electronic wizardry, and in the Siberian polity of Yekaterinburg, he brooded over the forges where mighty cannons were being cast and fools blinded by greed strove to recover lost industrial processes.  In Kiev and Novo Ruthenia and the principality of Suzdal, which were vassal states in all but name, he looked for ambitious men to encourage and suborn.  In the low dives of Moscow itself, he tracked the shifting movements of monks, gangsters, dissidents, and prostitutes, and pondered the fluctuations in the prices of hashish and opium.  Patient as a spider, he spun his webs.  Passionless as a gargoyle, he did what needed to be done.  His thoughts ranged from the merchant ports of the Baltic Sea to the pirate shipyards of the Pacific coast, from the shaman-haunted fringes of the Arctic to the radioactive wastes of the Mongolian Desert.  Always he watched.
But nobody’s thoughts can be everywhere.  And so the mighty duke missed the single greatest threat to his ambitions as it slipped quietly across the border into his someday empire from the desolate territory which had once been known as Kazakhstan . . .

Give me your best, and tell your friends to do likewise.  This is a terrific novel and it deserves a  terrific title.

Hi, Michael.
Feeling Russian spirit inside me :) I clearly understand that there isn't any other name for your novel, but
"Empiressionism" (or any its derative). Cause we (Russians) always looking for Empire (not only in Postutopian era :) ) but always more feelings than thoughts :)

Firstly, sir, I'm thrilled to hear that there's a Darger and Surplus novel on the way -- I've read all the stories and really dug them.

(one for Red rhetoric kitsch):
Emperors and Running Dogs

(one in line with the already-established nursery rhyme motif):
Hark Hark the Dogs Do Bark

With Your Gun and Your Hound (from a limerick, The Hunter of Reigate)

A Man in the Wilderness (a nursery rhyme)

To Russia With Love

The Rogues in Russia

The Dog and his Man

The Hour of the Wolf

Hidden Hearts/Heart in Snow/The Deathless Duke (from a mention of Koschei, though I don't know if this one is Deathless)

Fire in the Snow

Three ideas for you:

The Dog on the Other Shore: A Game of Confidence

Nothing tops DARGER AND SURPLUS.

To continue the nursery-rhyme titles:

For Want of a Nail

since you mention Proust and "A la Recherche du Temps Perdu" to highlight the fact a good title is essential, I wish to add that the incipits are also essential:
"Longtemps je me suis couché de bonne heure" is so ingenious.
Anyway, may I modestly suggest:
" The Mighty Dupe and the two crooks"
"Big Russian fish and small fry"
"Prost and hoax"

A Race, A Race to Moscow

A Surfeit of Muscovy

The dog, the wolf, and the spider

wow, what a great contest. I'm more used to poetry titles but hell, why not.

Shadows Behind the Door

To Torch The Tower


aaand i got nothin' else. Interesting that the double headed eagle was the symbol of so many royal houses.

The Duke Was in His Counting-House

The dog, the wolf, and the spider. Or: how the tsar's empire went online

And as a secondary suggestion:

Russian Spring - Bring in the Empire

"Misdirection in Muscovy" or "Howlround", but emphatically neither "Bones of the Kremlin" nor "Gorky Bark".

The road to Muscovy is paved with ash.
To wish upon a Tsar.
Jackals among the spires.

Wow! There are lots of terrific ideas here. (And a couple of clunkers, admittedly.) They're all being taken into serious consideration, even as the search continues.

Meanwhile, my Distinguished and Only Slightly Nepotistic Blue Ribbon Panel of Judges informs me that Matthew Frank's GORKY BARK deserves a prize of some kind. So, Matthew, if you'll email me your street address (to miswanwick ["at" sign] aol.com), I'll send you a chapbook.

'Grand Duke' in transliterated Russian is "Velikiy Knjaz", which has an odd and interestingly science-fictional feel to it.

I'm going to enter more things, if it's ok with everyone...

"Of Gods, Dogs, and Grifts" (if the fun short story from Greece is in the book)

"A Trickster's Guide to Post-Apocalyptic Eurasia"

"The Exploits of Surplus and Darger"

I'll keep thinking. Maybe I can come up with some more...

To See Such Sport

The Moscovite Autocrat and the Two Crafty Rascals


Rank and Prank in Moscow

Of Cons and Canis

The Dog Who Went Out in the Cold

A Grift Hound in the North

or, Always Look a Grift Hound in the North

ok, one more: Never Loose a Grift Hound in the North

To Con a Colder Duke

Never Grift a Norse Duke with a Hound

realllly bad riff on the preceding:

Never Look a Grift Norse in the Mouth

Wow, I'm going to have to throw my hat in the ring.

Of Dogs and Dukes

Of Dogs and Demons

Darger, the Dog, and the Duke

(Apparently I have aliteration on the brain at the moment)

Darger and Surplus in... THE DEMON DUKE OF MUSCOVY

The Moscow Dream
Phantom of Moscow
The Empire Ghost

(Reaching for a more symbolic title...)

The Russian Trickster and the Two Con Men

(...and of course failing miserably :)

(Sometimes the obvious gets left for last...)

The Duke of Muscovy and the Two Con Men

Hope it goes to the press very soon, Mr. Swanwick. I look forward to reading it.

To Dupe a Duke

The postutopian guide to grifting in Russia

How about "Master and Man" ?

Ashes of the Empire
The Hounds of Moscow