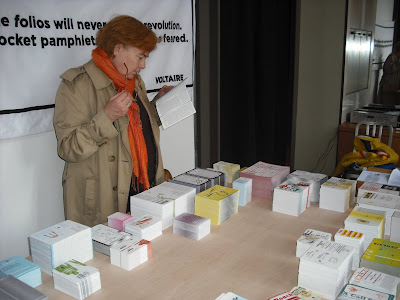 If you're like me, you go to a fair number of art exhibits.   How many of them let you take the art home with them?

There's the strange beauty of The Tract House - A Darwin Addition, an installation by Lisa Anne Auerbach.  It's made up of tracts riffing on Darwin.  The texts were penned by a variety of writers, poets, and ambitious volunteers and then attractively laid out and illustrated by a graphic designer.  Visitors are welcome to stop by the Tract House, browse through the offerings, and then take home copies of those they like.  I took home one of each and put them in an old cigar box I had lying around.

The exhibit is being done as part of Philagrafika 2010, a new annual festival of art prints.  You can find them here.  Why Darwin?  Because it's sponsored by the Philosophical Society.

The Tract House 'site is here.  And the vitals for those who'd like to visit are:


Oh, and did anybody else catch the big hockey game yesterday?


I'm not a jingoistic Olympics viewer.  It's nice when the home team wins, but mostly I just want to watch folks from all around the world being the absolute best at what they do.  Still, some sports simply belong to particular nations.  Like hockey does to Canada.

So when I discovered that the Canadian team were the underdogs in the final game against the U.S. team, my heart went right out to them.  And they won in overtime!

Is this a great continent or what?

Above:  Marianne Porter perusing tracts.  Art, (para)literature, and the woman I love, all in one snapshot!

That was great hockey. Miller was incredible, the US fielded a great team in general, and Canada really earned that win. In fact the Olympics were pretty amazing this year for all of North America; the US took home the most medals, and Canada took home the most gold medals from any Winter Olympics yet. This is an awesome continent indeed . . ..