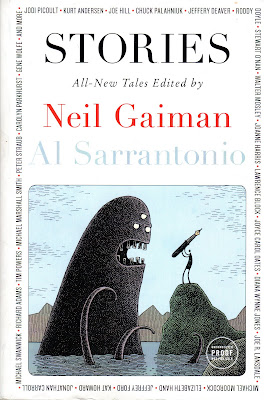 I've just received an Advance Reading Copy of what's got to be either the coolest or pretty-darned-close-est original anthology of the year:  Stories, edited by Neil Gaiman and Al Sarrantonio.  In Neil's intro, he emphasizes the importance of pure story as the raison d'etre.  But when Al hit me up for a story (that's how I came into possession of an ARC), the nuance was slightly different.  At the time, he told me they were looking for fantasy stories written as though the fantasy genre didn't exist.  (Emphasis and paraphrase both mine.)  Which was and is a brilliantly admirable thing to aspire to.

Why the shift in emphasis?  Well, a couple of the writers turned in stories which weren't fantasy at all -- but were too wonderfully enjoyable for any sane editor to turn down.  That's my interpretation, anyway, but I'm guessing it's a good one.

(I did a signing at a regional ALA conference once, sitting right next to Walter Mosley.  It was a humbling experience.  The librarians were pleased to get a free book from me.  But they approached Mosley with expressions of stunned joy at finding themselves in his presence.   When they extended their book toward him with both hands, I noticed that they all unconsciously dipped slightly, as if genuflecting before him.  And yet, I am happy to report, he was gracious and genial.  Somehow he's managed to keep a level head.)

So far I've only read a couple of the stories.  Peter Straub's "Mallon the Guru" was terrific.  Michael Moorcock's "Stories" (an admirably cheeky choice of titles) I loved a lot.  And I'm midway through Elizabeth Hand's "The Maiden Flight of McCauley's Bellerophon."  The first half of it's great -- and I'd be shocked and scandalized if the rest of it doesn't follow suit.

The book is coming out very, very soon from William Morrow.  I recommend it.

Or rather, yesterday would have been Akira Kurosawa's one hundredth birthday.  I celebrated it by watching Seven Samurai.  I once asked a Japanese friend why Kurosawa's genius is not fully acknowledged in his own country.  My friend looked embarrassed and mumbled something about Kurosawa just reusing plots from Shakespeare and other writers from the West.  No, no, no.  Half those plots weren't original to the West.  We stole them from him.

The search continues for a title for my Darger & Surplus novel.  All suggestions are welcome.  Even the frivolous ones, if they're funny enough.

Which is why I'm going to be sending Matthew Frank an autographed chapbook, as soon as he emails me a street address.  My Distinguished and Only Slightly Nepotistic Blue Ribbon Panel of Judges tells me that he has to be appropriately acknowledged for his Gorky Bark.

...and congratulations on your new story gracing "Stories"! First I'd heard of the new anthology. I see Tim Powers, and Joes Lansdale and Hill are also included. I'm definitely down for a copy and looking forward to the ToC.

"Surplus and Darger: The Mailer-Daemons of Moscow"

You could throw "The Adventures/Exploits of..." in front of Surplus and Darger too, if you wanted as well. I think exploits is a better word for confidence tricksters, but they are adventurers too...

The Hounding of Muscovy

The Final Plight of honest Thieves

Any Chance I can win that box of Awesome even if you don't choose my title? That prize is better than caviar, smoked salmon, and carpaccio wrapped in bacon.

As for the novel title.

"Two: Under The Rough Stars".

As for Mr Gaiman.

What a coincidence! Neil is now in Moscow promoting his Graveyard Book which was translated into Russian.

Yesterday I was among those who gathered to meet hin in one of Moscow's cafes.

The evening was really great!!!

I'm particularly happy for Neil because I know he's been wanting to visit Russia for a long time. And there's a great deal about Moscow which he will like immensely.

When You Wish Upon a Tsar

I'm delighted at having won a chapbook.

I've emailed you my snail mail address. (In the UK, I'm afraid.)

"Is this a Darger I see before me?" (have no idea how that would tie in with Moscow)

"Shooting Tsar" or "Shooting for the tsars" (somebody has probably mentioned the first one, but I can't be arsed to troll for it, and others have made the star/tsar connection before me)

"Demons spam Moscow" (not a good title, but it aint a bad headline)

"To milk a Moscow"