A Worthy Book I Won't Be Reviewing 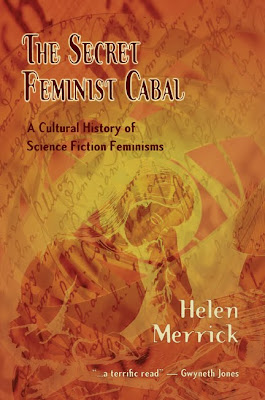 Aqueduct Press just sent me a book for possible review which, for all its virtues, I won't be passing judgment on.  The Secret Feminist Cabal, subtitled A Cultural History of Science Fiction Feminisms, by Helen Merrick looks to be a very smart history of feminist thought and activism in science fiction.  But the thought of writing about it makes my heart sink.

The thing is, I vividly remember the feminist upsurge in the 1970s, characterized by some extremely important works of science fiction and a number of passionate essays explaining the thinking behind the fictions.  I also remember the male response to them.  Even at the time, the worst of those responses made me cringe.  Today, looking back, even the best of them makes me . . . is there a comparative verb form of cringe?  Or a superlative?  Cringier?  Cringiest?

Part of the problem, admittedly, was that the sexual revolution was still underway at that time and so to a lot of us it seemed that being outrageously outspoken was virtuous.  (Theodore Sturgeon's "If All Men Were Brothers . . .", a thought experiment defending incest, seemed brilliant then for making its case for the unthinkable, where today it looks wrong-headed and embarrassing.)  Thus, Michael G. Coney's response to Joanna Russ's classic story "When It Changed," was to declare that it showed that the author hated him "because Joanna Russ hasn't got a prick."  SF gadfly Richard Geis titled his review of Russ's The Female Man, "Pardon Me, But Your Vagina Just Bit My Penis."

I'd like to think that even then, when I was young and a fool, I had enough sense not to write crap like that.  But what about the responses to feminism by men like Isaac Asimov or Poul Anderson or Philip K. Dick, who come across today as paternalistic and patronizing?  Back then, I only wished I could write like them.  But Merrick hangs them up to dry simply by quoting them, fairly and in context.

Worst of all (to a potential reviewer) were the men who came out wholeheartedly in favor of the feminists, and proceeded to make total asses of themselves by setting themselves up as spokesmen for the movement and then presenting overstated and condescending rehashes of observations made by women who knew what they were actually talking about.  Charlotte Perkins Gilman, the author of Herland, had a name for these guys  -- she called them "women worshippers," and it was clear that she despised the lot of them.

So, no.  I won't be reviewing The Secret Feminist Cabal.  If you're the sort of person who needs to read this book, however -- and by now you should know whether you are or not -- this is a book you really do need to read.  You can read what the publisher has to say about it here.

I'd point out that the index is unforgivably bad.  All the info above about Russ, Asimov, Dick, Coney, Anderson, and Geis, can be found on pages 59 through 68, which include generous quotes from Dick, Coney, and Anderson.  Asimov and Dick are not mentioned in the index at all, and of the others only Coney has a citation which will send you to this section (though not to a page mentioning him).  The entry for Russ reads:  250, 252, 254, 232.   There must surely be a simply explanation for how this foul-up happened, but damned if I can figure out what it is.

Posted by Michael Swanwick at 7:31 PM

Thanks for the non-review, anyhow. I didn't know that the book existed and it's something I'm interested in.

The feeling of vicarious embarrassment that makes you cringe at the egregious conduct of others is, according to an internet neologism, "igritude." The passages in question made you igry.

I got a lot out of your non-review and am more likely to read the book.

Best wishes to you and M,
Josh

Often times, indices are outsourced to third-party companies who may not understand the material, but you're right that's no excuse for not giving the index a thorough looking over.

I just read a section detailing Marion Zimmer Bradley's complex relationship with the feminist debate. It goes from page 152 through page 165, under the heading "An evolution of consciousness": Bradley, fandom, and feminism. Yet the index lists Bradley as being mentioned only on pages 83, 117, and 256.

This goes beyond somebody not understanding the material and into the realm of lots-of-information-somehow-got-lost. A pity, because it greatly lessens the book's value as a reference work.

Otherwise, the book seems to be quite good.

Like M. Snail above, I thank you for the non-review. But since you gave no link, I had to google the book... and I can't begin to tell you how silly I felt googling "secret feminist cabal". I just hope no one is trolling through my search history...

An extremely good point, Stephen. I've corrected the post as per your suggestion. And I apologize for not providing a link in the first place.