How To Write (Postgraduate Course 101) 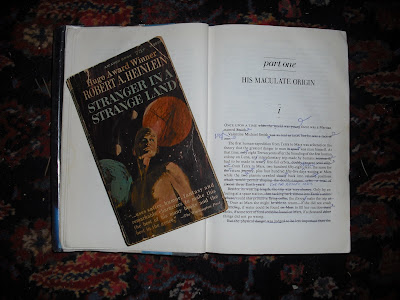 While the contest is simmering away, I thought I'd tell you about a book I bought for a quarter at a library sale the other day.  New and gonnabe writers may find this useful:

The book was a hardcover copy of Stranger in a Strange Land by Robert A Heinlein.  More specifically, it was the first edition of the Original Uncut Version . . .  essentially, the unedited manuscript.  When RAH turned it in, his editor insisted it be cut.  And it was cut, from 220,000 words to 160,000 words.  After Heinlein died, his widow Virginia had his books reissued as they were when he first handed them in to his publisher.

Which gave me the opportunity to re-create that original editing and see what it teaches us.  I got out my paperback of the book as it was first published and reverse-engineered the first page.

Here's the opening to Heinlein's most famous novel as he turned it in:

Once upon a time when the world was young there was a Martian named Smith.


Valentine Michael Smith was as real as taxes but he was a race of one.

Now, there's nothing actually bad about that.  But compare it to the opening after it was edited down:

Once upon a time there was a Martian named Valentine Michael Smith.


Which is one of the most famous opening lines in science fiction, and deserves to be.

I marked up the page to reflect the changes that Heinlein (not his editor -- I'll get back to that in a moment) made.  You can click on the photo to see them.  After the opening flourish, Heinlein cut 82 words from the original 205 and added 5.  Which is to say he cut well over a third of the page.

Years ago -- have I ever told you this story? -- I cut five thousand words from a ten thousand word story.  There was a lot of money involved.  So when I went over Heinlein's text, crossing words out, I was on familiar territory.  First to go are the adverbs.  Then excess description.  Qualifiers.  Explanations of all kinds.  All those embedded essays which don't advance the action.  Everything that isn't absolutely necessary to the story.  And, having been through this myself, I am convinced that the cutting was primarily done by RAH himself.  Because all that was most essential and all that was most idiosyncratic about his prose remained.   No editor willing to require a cut of more than a quarter of the text would have made the effort to preserve those idiosyncrasies.

And the end result?  There was an undeniable flattening of Heinlein's prose here and there.  Cutting it to the bone did make his novel look pulpish where it was not.  And people who have read the whole thing through  testify that there were sexy bits (dipping in at random, I haven't found them) which were cut simply because the times were far more prudish back then.  But for the most part the cuts were salutary.  Removing "slowly"s and "if less important than"s and the like brought up the brilliance of his active creations in the same way that grinding away encrustations reveal the brilliance of fossil bones.

Here's the rest of the page with added words in brackets:

The first human expedition from Terra to Mars was selected on the theory that the greatest danger to man in space was man himself.  At that time, only eight Terran years after the founding of the first human colony on Luna, any interplanetary trip made by humans necessarily had to be made in weary free-fall orbits, doubly tangent semi-ellipses -- from Terra to Mars, two hundred fifty-eight [Terran] days waiting at Mars while the two planets crawled slowly back into relative positions which would permit shaping the doubly-tangent orbit -- a total of almost three Earth years [for the return orbit].

Besides its wearing length, the trip was very chancy.   Only by refueling at a space station, then tacking back almost into Earth's atmosphere, could this primitive flying coffin, the Envoy, make the trip at all.  Once at Mars she might be able to return -- if she did not crash in landing, if water could be found on Mars to fill her reaction-mass tanks, if some sort of food could be found on Mars, ifa thousand other things did not go wrong.

One can regret some of the lost technical detail, but there's no denying that the sleeked-down version read a lot cleaner, crisper, and clearer.

And how is this helpful to new writers?

Well, one of the things that all of us have to learn is to cut, cut, cut -- and then cut some more.  It hurts.  Particularly when you have to cut something that's actually good.  Afterward, you look at the manuscript page and it's all corrections and slash-outs and . . .

But look at Heinlein!  Buy one of his novels in edited and unedited forms.  Compare and contrast.  You'll discover that he was never really Robert A. Heinlein, just a guy who could be edited down into Robert A. Heinlein.

So, too, with you.  Yeah, your prose is lamentable.  But maybe you're a lot closer than you think.  Maybe your awful novel can be edited down into something splendid.


And have you heard?

J. D. Salinger is dead.  I love everything he's ever written except for Catcher in the Rye.  Now the vultures are gathering on PBS and NPR and BBC to explain that the only possible explanation for his long silence was that he was crazy.

I'll explain why on Monday.

. . . is still on.  Getting a neologism right is hard work.  Otherwise, I'd never have asked for your help.  Right now, I'm at the making-lists-and-sorting-through-suggestions stage.  And I've assembled a Blue Ribbon Panel of unpaid family members to help me decide.

More ideas are always welcome.  You can post 'em here or after Thursday's blog.

What about a diminutive, say "tistics"?

Maybe I should've said that my last comment was for the neologism...

I figured it out immediately. And probably everybody else gets it too. This is a pretty smart batch of people.

My brain went on a Heideggerian bend last night before sleep, so here are a few more.... It's all based off of the concept of DaSein (or Dasein, whatever floats your boat).

Daseinchen -- Little consciousness, a term I came up with to encompass pets to argue for their place on a spectrum of consciousness based off of Heidegger (something he greatly regretted in later life).

Cartesians -- Descartes viewed non-humans as little robot creatures that couldn't feel pain, but acted like they did. A great choice if they are treated as entirely subhuman creatures. Also good if they let them suffer and/or do surgery without anesthesia.

Has anyone suggested Subhumans?

Also, one Nietzschean suggestion: Untermensch(+en for plural) - think of it as the complete opposite of Zarathustra and the Übermensch.

I read the unabridged _The Puppet Masters_ some years ago, and was impressed by how bloated, flabby and listless it was compared to my slim and energetic 1950s paperback original. That was the moment I worked out what editors were for.

I very much appreciate "You'll discover that he was never really Robert A. Heinlein, just a guy who could be edited down into Robert A. Heinlein." - that's the same thing I took away from Julie Philip's Tiptree biography - that there never was a James Tiptree, just someone who could write James TIptree stories.

(And to make it clear - I'm talking about neither the assumed gender nor the pseudonym here. It would be equally true if she'd written as Alice Mary Sheldon.)

I've just finished your Hope Mirrlees book and didn't get anything like the same feeling - she was fascinating and a bit sad [Funny that she knew Anthony Powell, as she seems herself to be a missing character from _A Dance to the Music of Time_] but I could never form a picture of her as a person capable of writing Lud in the Mist. She was a very odd duck.

By which standards, Ms Mirrlees is exemplary

A very odd duck, mind you, as are we all. But also exemplary.

I hope I'm not giving the wrong impression here - the thing I found fascinating and ultimately uplifting about the Tiptree biography was the way that a fairly flawed human being could be transformed into the writings of James Tiptree. Straw into gold isn't a better trick.

As for Mirrlees - Lud in the Mist is indeed exemplary. I picked it up because of your biography (and because of its reputation) under the impression that I'd read it before. If I did, I must have been a great deal younger, as the book I just read is quite unlike anything I've seen before.

Thinking of fantasy from before the establishment of fantasy as a genre, what do you think of Silverlock?

I came to Silverlock too late, I think. It failed to catch fire in my imagination.

There are books and, indeed, authors who have "windows" much like the launch windows for space launches. If you come to them too late, you won't get them. Herman Hesse's probably the best-known example of this. I was ripping through his work madly (even the early books, like Under The Wheel) when, several chapters into The Glass Bead Game, the window abruptly closed. Try though I did, repeatedly, I could not get more than a page or two deeper in.

It's a sad phenomenon, really.

Unobservants: since these servants are not very perceptive or reactive.

Unattends/Unattendeds, Deattends/Deattendeds, or Inattends/Inattendeds: because "attend" in neurological terms means to focus your attention on something, and "attend" also means to wait upon someone like a servant.

Dissociates: since these servants/associates have aspects of dissociative disorders too!

Depersons or Depersonals: since depersonalization is loss of sense of identity with ensuing social problems.

Other possibilities that occur to me are:
Abulics (they have sluggish or no reactions to most stimuli)
Apercepts
Apaths
Passervant (passive servants)
Abstracteds
Detacheds

Dullites: riffing on concepts of dullards, dull workers, and Luddites.

I remember this being used to mean "person" in Chaucer, and its cognates can mean "dwarf" "gnome" etc. Also it can just mean "[living] thing".

I seem to recall the Autistic in the first Darger/Surplus story was a dwarf; does that mean all of them are?

Anyway, here it what etymonline has to say about this word:

I think this is best idea I'm going to have between now and Thursday, so I'm doubling down on "wight"!

D'oh, it's the savant that was a dwarf, not the autistic. :(

Satellite - the range of meanings (including the astronomical one) to me imply someone who mindlessly follows another everywhere, a sort of external appendage of the master. Also, the Russian word "sputnik" supposedly means both satellite and traveling companion, so the term would have an easy translation into Russian that us anglophone readers would grasp easily.

Now that we all seem to have burned through the thesaurus, the etymological dictionary is reaping new fruit. :)

I like this blog, good luck ..! also visit hotel in bandung or nikon digital camera cases