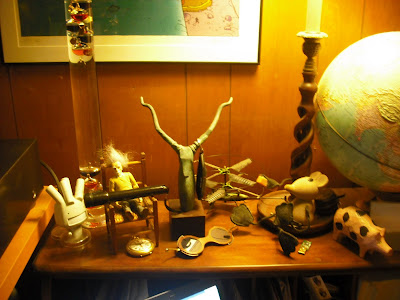 Everybody seems to be curious about where writers work.  Kyle Cassidy is putting together a book called Where I Write of photos of and text about (mostly genre) writers' offices.  But as Theodore Sturgeon used to say, "Ask the next question."  What do non-writers' desks look like?

Above is the very top of Marianne Porter's desk.  It holds, from left to right:

A Japanese figurine representing Aspergillus, a saprophytic mold, given to her by Ben Davis, one of our next-generation friends.

A Galilean thermometer.  Bought by Sean to replace the one I bought Marianne, which he broke.

A very small chair.  In it, an Albert Einstein action figure.  Atop both, a flashlight.

Beneath the chair, a stemwinder.  This one's mine, actually, a gift from Jason Van Hollander.  It's kept on Marianne's desk because, quite frankly, it's safer there than on mine.

A statuette of an antelope given us by Bob Walters and Tess Kissinger.  "Your walls are full," Tess said, "so we're moving you into the third dimension."

Hanging from one horn of the antelope, a 16-gig flash drive in protective case.

An antique pair of welding glasses.

A stuffed Ignatz Mouse toy.  That was a gift from me.  You can tell I've got it bad for Marianne.

A flash drive whose housing was shattered when Sean closed the car door on it.  It still works.  Marianne hasn't decided what to do with it yet.  Looks rad, though.

A lamp.  The only thing that got broken when the ceiling fell down was its shade.

A world globe.  It lights up.  Elsewhere in the room are globes of Mars, the Moon, and Venus.  They don't.

A wooden pig.  It was standing on top of a set of metal basement doors set into the sidewalk on 21st Street in Center City Philadelphia, so Marianne picked it up and gave it a home.

In the shadow of the globe, a photograph of the tube stop platform of Turnham Green in London.  We stayed in a B&B there when Sean was eight.  As we left forever, he snatched up the camera and took a snap, so he could "remember it forever."

And on the wall behind the desk is a Jean Giraud ("Moebius") serigraph entitled The Star Watcher.

Taken all together, I believe these artifacts shed some small glimmer of insight into the non-writer's mind.  It's an underexplored field, and one that bears further examination.  Let this modest pioneering effort serve as a beginning.

Big.  Fierce.  Extinct for millions and millions of years.  What could possibly make dinosaurs even cooler than they are already?

That's right -- poison fangs!  Which Sinornithosaurus allegedly has.  You can read what looks to be a balanced account of it all here.

Posted by Michael Swanwick at 2:04 AM

Sinornithosaurus doesn't seem to have been all that big (I guess we can assume it was fierce), but the really frightening thing is that it was "in the lineage directly leading to birds" (to quote David Burman who was quoted in that cool Pop Sci article you linked to). Just imagine if flying creatures with poisonous fangs had evolved! That would have sucked.

They always play free and loose with the lineage thing. It's a pretty safe bet that Sinornithosaurus was already divergent from the line that led to modern birds.

It is an interesting question why birds never developed poisonous fangs, though. Maybe as a hunting strategy, it was incompatible with flight?