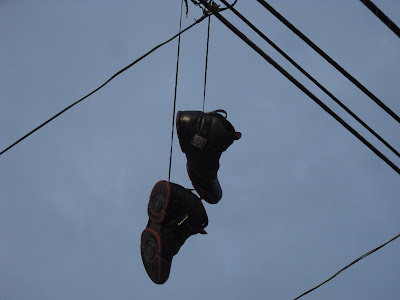 It looks like another venerable tradition is dying.  I speak, of course, of the tradition of tying sneakers together by their laces and then throwing them over telephone wires.  Back in the day, you'd see great tangles of them -- twenty, forty pairs or more -- looking like the nest of some enormous child-eating bird.  There were some great ones in the Winooski, Vermont, of my childhood.  But the very best I ever saw was here in Roxborough, outside the entrance to the play yard behind Levering Elementary back when Sean went there.  How large was it?  A hundred pairs?  Too large to count, at any rate.

The funny thing was that nobody seemed to know for sure how they got there.  There were two schools of thought on the issue.  One was that when kids got new sneakers, they'd throw their old ones over the telephone wires.  Which is at least partly true . . .  I know I did, once.  The other theory was that bullies ripped the shoes off smaller kids and threw them up where they couldn't be retrieved simply to be cruel.  I never saw that happen, but it seems plausible as well.

Some people reading this are going to suggest a third possibility, that I'm making the whole thing up.  I know this because that's how people react to almost anything I say.  There's something inherently untrustworthy about me, I suppose, or maybe a better word for it would be implausible.  For years, Marianne refused to believe in Hoppity Hooper, simply because I described the show so enthusiastically.  Gregory Feeley refused to believe in Bean Day, Clothesline Night, Gate Night (aka Bicycle Night), Pumpkin Night or Cabbage Night (though I believe he grudgingly admitted to the existence of Halloween) simply because I vouched for them.   And whenever Gardner Dozois and I got to reminiscing about The Banana Man, entire roomfuls of people would start hooting in disbelief.

Nevertheless, I'm telling the truth.  The Levering Elementary tangle was eventually deemed a potential hazard by the school and the telephone people came with a cherry-picker to cut it away.  I kept expecting a new one to grow in its place, but it never did.  The other day I went by there and found a single pair of sneakers twisting slowly in the wind, lonely and forlorn.

As is the pair, above, to be found on Leverington Avenue a couple of houses down from my own.

I've experienced enough shocked disbelief in my life to have learned that in most places kids don't throw sneakers over telephone wires and never did.  Still, I've lived in two such locales.  It can't be all that rare.  Does anybody else know of anyplace where this is or was a commonplace?

Here's proof that Hoppity Hooper, a frog, his uncle Waldo Wigglesworth, a fox, and Filmore, the strongest bear in Captivity, Wisconsin, really did exist.  In the imagination of Jay Ward if nowhere else. This is a segment of one of the very best episodes,  The Traffic Zone.

And also, the immortal Banana Man!  Who, as it turns out, wasn't the real Banana Man at all but, instead, was actually . . . but, heck, why bother to tell you that story when you're not going to believe a word I tell you?

Posted by Michael Swanwick at 12:06 AM

Actually, the act of throwing shoes over telephone wires is alive and well. Unfortunately where I live (The Capitol Hill neighborhood of Denver) the tradition has taken a somewhat nefarious turn. When you see shoes hanging from telephone wires in my neighborhood, it usually signifies that crack cocaine is for sale nearby.

Shoes-over-telephone-lines seems to be having a bit of a revival in Melbourne (the real one, not Florida) over the last year or so. I never used to see them, but now they're all over the place.

As to your inherent untrustworthiness, I'm willing to believe you on Hopity Hooper and Banana Man if you're willing to believe me when I say that Adam Ant (singer of Adam and the Ants, punk era pretty boy pop star) seems to have taken his stage name from an old BBC tv show, "Adam Adamant"

You once said on this blog that you didn't dicuss your work critically in public. I respect that completely, but hope this question is sufficiently trivial to fall outside the danger zone:

- no court in the land would convict me for claiming that Legions in Time is your A.E. Van Vogt story.

- there is modest circumstantial evidence that The Raggle Taggle Gypsy-O is your Roger Zelazny story.

- wild unproveable surmise leads me to claim that Hello Said the Stick is your Ian (or is it Iain?) Banks story.

Do you agree? Are there others? Or does the witness stand mute?

Wow. Crack cocaine? It's sad to see the innocent vandalism of my youth corrupted so.

I'd never heard of Adam Adamant, but it makes a lot more sense than the alternative. I'd always assumed that Mr. Ant had, for some inexplicable reason named himself after Atom Ant.

As for the stories . . . You're right about "Legions in Time" and "The Raggle Taggle Gypsy-O" but not about "'Hello,' Said the Stick," which was actually my Larry Niven story. I took the idea of mercenaries fighting with primitive weapons to preserve locally mandated suppression of technology from "A Night on Mispec Moor." Then I simply told the story in that clean, lucid style of his best work.

Niven has a particular brilliance for plotting, which I don't think has received sufficient praise. In my posthumous collaboration with Avram Davidson, "Virgil Magus, King Without Country," the climactic plot resolution (though NOT the prose style) was swiped from "What Good is a Glass Dagger?"

There may be others. "The Wisdom of Old Earth" was definitely inspired by a Jack London story I thought pretty offensively racist. Mostly, though, I use other writers' ideas or images as jumping-off places for my own ideas. Greg Feeley was convinced that "Mother Grasshopper" was inspired by an Brian Aldiss story, where actually I got the image of a planet-sized grasshopper from Michael Bishop's "Rogue Tomato."

I tried to convince Feeley of the truth. "Why would I lie?" I asked. "Aldiss is a bigger name than Mike is, so it's more respectable to lift an image from him." But, as seems inevitable by now, Greg was unconvinced.

I know that there were sneakers on telephone wires in Texas, at least twenty years ago.

They were said then to carry some nefarious gangland message, cf. Noh's comment.

I've seen it in Albany NY, Boston MA, Albuquerque NM and Omaha NE. In my experience it seems to be more common near corners where illegal drugs can be purchased.

Let me ask everybody here, for clarity's sake, if you're talking about single pairs of sneakers or great tangles of sneakers.

I'm interested in both, but most particularly fascinated by the multi-sneaker tangles.

I have seen more than one pair of sneakers on a wire, but don't think I have ever witnessed a Great Tangle.

I've seen both singles and tangles in all parts of my little burg of Knoxville, TN.

That banana man clip awoke some kind of long-buried childhood memory. I think I saw this before when I was like 3 or something.

In the San Francisco bay area this is used to indicate that drugs are available on sale close-by...

Okay, I am gobsmacked. And alarmed. So I went to Snopes.com, and it seems that even they have no idea why people throw sneakers over power lines and power lines. They SEEM to suggest that the crack dealer connection is an urban legend, though.

They could be wrong, of course. But though there are crack dealers in Roxborough, I'm pretty sure there are none near the two places I know of with telephone wire sneakers. So the issue remains unresolved.

Pat, I thank you for your correction. Which I have, you shall note, taken.

I have a strange relationship with French. All the attempts to teach me it have failed. Yet somehow I keep throwing bits of incidental French into my novels. I have no idea why. Perhaps an acknowledgment that the problem is a shortcoming on my part?

A beautiful language, even if I simply cannot master it. "French is counted sweetest by those who'll ne'er it read," as they say.

Good thing Banana Man "took the train," instead of dealing with airport security.

Alas, all it would take is one unsuccessful terrorist attack on Amtrak to make train travel as unpleasant and humiliating as air travel.

Still, I'd love to be there when the Banana Man went one-on-one against the TSA. I know who I'd place MY money on.

We've got one single pair of sneakers hanging over a wire on our street. No tangles of 'em, though.

Barbara said she'd always heard that a pair of sneakers thrown over a telephone wire was meant as a memorial for a gangbanger who died (usually as a consequence of a drug turf war). I'll have to ask her where she heard that.

This is beginning to sound more and more urban legend-ish. (Sneakers evoke young black males, and therefore gangbangers and crack.) Which is not to dismiss the usages out of hand. But it does make one wonder.