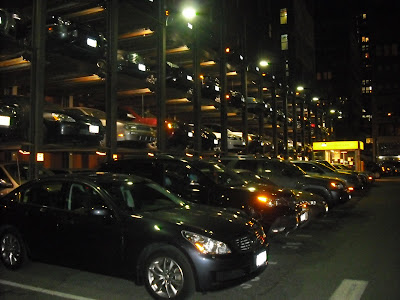 Wednesday, Marianne and I went to New York City on Megabus for the first time, and` I've got to say it's a great deal -- from Philly to the Big Apple and back for twenty bucks -- less than it costs for parking at one of the cheaper garages in the Village -- and they throw in free wi-fi.  Tom Purdom went up by Bolt Bus, for a comparable amount and was also perfectly satisfied.

We went to NYC for a seminar sponsored by the National Writers Union, the American Society of Journalists and Authors, and the Science Fiction and Fantasy Writers of America on the Google Settlement.  There were also four representatives from the Authors Guild, which cut the deal with Google, one of whom sat on the panel but, after ducking four or five questions, had to leave for a piano recital.  As did, apparently, the other three people from the Guild.

Most of what was said was way too complicated for me to attempt to summarize here.  But here is the super-simplified version:


If you're a writer, you have week or less to decide if you want to opt out.

Fortunately, Google has a new and simplified opt-out form.  You can find it at www.googlebooksettlement.com.  Scroll down the page, click on Opt Out, and follow the step-by-step instructions.  According to Lynn Chu, an agent and lawyer who is opposed to the settlement, you don't need to list all your works in the tiny little box provided, just paste in the words “This opt out request should be considered to apply to all works whatsoever of mine that appear in any and all books either by myself or by others.”

If you don't opt out, you are automatically opted in and legally bound to all the terms of the Google Settlement.


Period.  Everybody agrees on this point.

James Grimmelmann, who is an associate professor at New York Law School and affiliated with the Institute for Information Law and Policy, has put together an extensive Website on the settlement, including an annotated copy of the settlement itself.  You can find it at http://thepublicindex.org/.  Grimmelmann is as close to a non-partisan voice as this controversy has.

I should warn you, however, that even Grimmelmann admits that there's a lot about the legal implications of the settlement that he doesn't understand.

And that's it in a nutshell.  Personally, I opted out, simply because I don't think I should sign on to any agreement that a lawyer tells me he doesn't understand.  I've also sent in an e-mail to add my name to Ursula K. Le Guin's petition.  Which can be found here.

Above:  One of the many NYC parking lots that's more expensive than going up by bus.  My heart still belongs to Amtrak, but my wallet loves Megabus.

Posted by Michael Swanwick at 9:33 AM

What if you haven't published yet - will all your future works become part of the settlement if you don't opt out now? Or do I just totally not understand this legal quagmire?

That was one of the questions I wanted to ask, and didn't get the chance to. Based on everything else I heard, my guess is that nobody knows.

In practical terms, if you're not published as of I'm guessing four or six or eight years from now when the court cases have worked their way through the legal system, it'll be a moot case. Either the Google deal will have collapsed of its own illegality and no longer exist, or it'll be the only game in town.

Before then, your fate will be in limbo, like all the rest of us.

If you want to opt out (and I should emphasize here that writers who want to opt in are also making an intelligent and respectable decision), you could always do it now and specify "all present and future works." It's worth a shot, anyway.