We Have A WINNER! 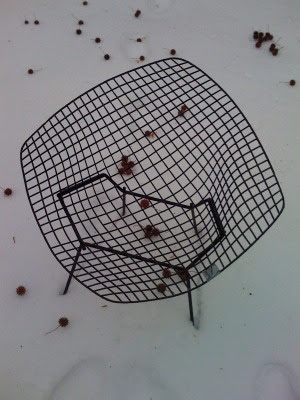 What a year it's been for the Godless Atheist Christmas Card competition!  Photo cards of the senders were very big this season.  Britton and Jacqueline sent a snap of themselves at a football game.  Penny and Dick's photo showed them in front of a waterfall somewhere in the Rockies dressed for warm weather hiking.  And Liz's family posed doing a variant of the see-no-evil-hear-no-evil monkeys behind what looked to be an enormous dish of radishes.  These were all excellent attempts, and only the presence of actual family members who appeared to love one another kept them from sliding into absolute nihilism.
Then there were the commercial cards prepackaged to come within a whisker of Godlessness.  The photo of a panda sadly resting its chin on a lump of snow was probably taken in Chengdu, which was its saving.  The Disney card of Tinkerbell showing off her perky, Barbie-esque cleavage had the sulfurous stench of idolatry to it.  And then of course there were the polka-dot flip-flops resting on beach sand.  Only the suspicion that the flowers decorating the straps were supposed to be poinsettias kept this last one from perfect seasonal inappropriateness.
One of the usual front-runners put in a poor showing this year.  Couple B succumbed to sentimentality by sending a card showing bright galaxies hanging in the sky over a wilderness scene.  It was clearly intended to evoke science fictional "sense of wonder," but in practice came far too close to religious awe and the judges disqualified it in a heartbeat.
And the results?
Fourth place went to Person C, who cashed in a small fraction of the karma he earned this year, working hard to improve the lives of people in the Third World, by sending a photo of a sculpture on a California campus that appeared to be an assemblage of boulders making up a crude but gigantic teddy bear.  Even the (deliberate? accidental?) similarity of the sculpture to Winnie-the-Pooh failed to evoke any seasonal sentiment whatsoever.
Third place went to Friends Who Spent Christmas in Hawaii -- which in and of itself was already one strike against them -- for a card decorated with Adinkra symbols expressing such sentiments as Obik Nka Obie ("bite not one another"), Sankofa ("return and get it") and Funtunfunefu Denkyemfunefu ("Siamese crocodiles").  A card whose irrelevance extends beyond Christmas to cover Easter, Arbor Day, your cousin's Bat Mitzvah . . .  and in fact, any card-worthy event you can think of.
Second place went to multi-year-winners Couple A.  Their card arrived the day after Christmas, almost disqualifying them.  But its artwork of a faceless soldier holding a machine gun (good artwork, I hasten to stress) was so strong as to demand their inclusion.
But the winners were unquestionably our good friends Anonymous, who sent the above photo with a cheery message of "mathematical modernist winter greetings."  It was the, yes, mathematical grid-like machined precision of the the chair, coupled with the inherent sadness of a garden in winter that did it.   Truly breathtaking.
So, congratulations to all the winners!  And to all the other contestants, better luck next year!
*
Posted by Michael Swanwick at 7:35 AM