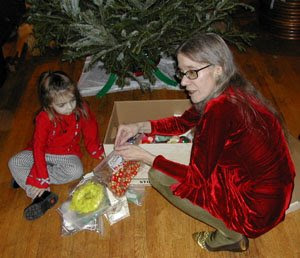 .
Marianne and I went out to dinner last night with Gardner Dozois and Susan Casper and Ricky Kagan. One of the many things we talked about was the ongoing organization of Janet Kagan's papers, which are going to the Jack Williamson Science Fiction Library at Eastern New Mexico University. There ought to be some fascinating stuff among the papers -- Ricky mentioned unpublished novels -- but I've got to say that it always makes me sad to think that we don't have Janet around anymore. She was a great friend, and a real live wire. She threw off sparks.

One time, though, at a convention, she became convinced that I was angry with her. Here's the explanation of how I came about to write a short-short called "Like the Boiled Eggs in Isaac Asimov":

Introduction
I wrote this story years ago at some long-forgotten convention because Janet Kagan thought I was angry at her. In a late-night conversation she’d asked me about a disturbing recurrent element she’d seen in my fiction. I told her she was mistaken. She explained that she had a preternatural ability to spot such things in people’s stories, and gave me several impressive examples. I said that was nice, but that in this one instance she was wrong.

Most writers are monsters of ego. Not Janet. She decided she’d offended me and became immensely unhappy with herself for doing so. I couldn’t convince her otherwise.

The next morning at breakfast, pondering ways I might reassure Janet we were still friends, it occurred to me to write a story about our misunderstanding. So I flipped open my notebook and jotted down “Like the Boiled Eggs in Isaac Asimov.” And indeed, as I knew it would, the story made everything good between us.

Meanwhile, Allen Steele was standing outside the hotel with a Styrofoam cup of coffee in his hand, waiting for a shuttle bus. He didn’t know that he was about to enter the enduring folklore of science fiction.

But that’s another story, for another day.


And here's the story itself. I posted it earlier this year, when Janet died, but what the hell. It made her laugh. And that still makes me happy.

Like the Boiled Eggs in Isaac Asimov
She hadn't wanted the gift.

Janet Kagan had simply woken up one morning and there it was: the ability to detect patterns in other people's fiction. Things like the giant cheese wedges in Norman Spinrad. The Barney imagery in Joanna Russ. The shaved mice in Larry Niven.

Which was why she was where she was now – running in blind terror down a long and Harlan Ellisonesque alley while the misshapen shadows of her pursuers leapt and capered on the walls.

It made no sense whatsoever to her that they wanted to kill her. But they did. She knew that. It was as clear as the references to the Trilateral Commission in the novels of Samuel R. Delany. Janet stumbled against a trash can, sending it crashing noisily to the ground. She fell, and struggled back to her feet, and ran.

There up ahead – a wall! With a sickening lurch in the pit of her stomach, she realized that she was caught in a cul-de-sac.

There was no way out. She could no more hope to escape than she could avoid seeing the encoded messages to Libyan terrorists in the Xanth novels of Piers Anthony.

In despair, she stumbled to a halt.

Her pursuers, seeing she was trapped, stopped as well. A menacing form stepped out of the shadows. It was the head of SFWA's crack team of assassins, James Morrow himself. He had a lead pipe in his hand. His eyes glowed red, as if he were one of the myriad werewolves informing his own fiction.

Behind him were more shadows, deformed, unsightly. Writers all.

"God damn it," Janet cried in anguish, "I wasn't even an English major!"

And then they were upon her.