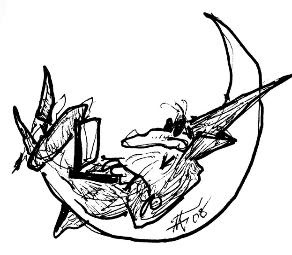 .
Fan cartoonist extraordinaire (and the man who beat me out for the Campbell Award for best new writer way back in '82 or '83-- not that I'm bitter or anything, mind you.  Bitter?  Me?  It is to laugh) Alexis Gilliland has created a website for his cartoons.  To date he's got something like 300 up, but the plan is to post thousands -- thousands! -- over the coming months.
So far, none of my absolute favorites have made it up.  I'm thinking, of course, of the bureaucrat sitting at a desk with a small box atop it.  "This box of gravity-proof material contains a miniature black hole," he says with a distinctly mean smile.  "Doubters open it every time!"
Or the cartoon, now residing in a small frame in my library, which shows a disgusted-looking man holding up by two fingers a book from which a drop of something liquid falls.  His observation?  "Never let a bibliosexual into your library."
Or . . . but enough.  Go take a look.  Sooner or later, they'll all make their way online.
And when will the project be completed?  My best guess is never.  I've been in convention bar conversations where Alexis sat calmly chatting while compulsively doodling cartoon after cartoon.  Nobody can keep up with that kind of productivity.
And, NOT as usual . . .
The last Poem du Jour has been posted.  There were 99 letters, which were saved from oblivion by Ben Davis (thanks, Ben!) and the rest, the many which came before then, are gone wherever old emails go.  A farm somewhere upstate, as I understand it.
It's been fun, and now it's over.  Freeing up more time, I might add, for other projects.  So I step briefly into the light and bow.  The applause washes over me.  And I fade back into the shadows.
This blog you're reading, however, will continue.  Certain of my friends demand it.
*
Posted by Michael Swanwick at 7:10 AM

And certain of your readers demand it as well.

Very sorry to hear poemdujour is finished - it had gone on so long that I'd hoped you had ventured into new material and would sooner or latter tell us what you thought about Edith Sitwell's 'Green Geese'.

Regardless - it's been a very enjoyable read.