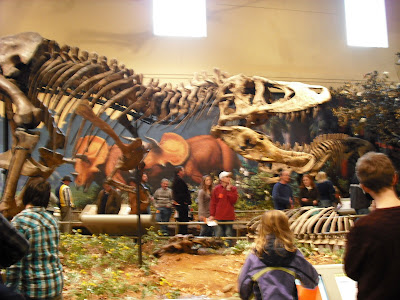 .
How did you spent Black Friday?  I spent it at the Carnegie.  The theme of the International (did they used to have themes?  I don't think so) was Life On Mars, and while most of the artists did as much with it as you'd expect of a batch of postmodern artists, one -- Mike Kelley -- batted a thousand with his Kandors.  They were a variety of takes on Superman's Kandor, the City in a Bottle (I feel like there ought to be a trademark sign after that) done in ceramic gas tanks and crystalline cities.  Beautiful stuff.  The artist was inspired by the fact that the appearance of Kandor differed from comic to comic.
Was there ever a better example of how the line between high art and low has been blurred, trampled over, inverted, and made of mockery of in recent years?
I was also blown away by the Hall of Dinosaurs remake (blurry snapshot above) in the Natural History half of the Museum.  The award-winning mural by my friends Bob Walters and Tess Kissinger of the Walters and Kissinger Studio was not only the longest dino mural ever made but quite simply wonderful.  But I have to admit that everything else about the redo was also first-rate.  The mounts were fabulous, the pathways between exhibits open and easy to walk, the diorama materials so carefully placed as to make it the easiest thing in the world for amateur photographers to grab snaps that looked like they were taken in situ in the Cretaceous . . . well, suffice it to say that the Inner Science Kid was entirely satisfied.
Only two quibbles:  1)  The reconstruction of Confuciusornis looked far more like a magpie than the fossils would lead one to expect.   And 2)  Now the Hall of Mammals looks second-rate by comparison.  Its fossils are world-class.  Let's hope the Carnegie quickly finds the enormous amount of money it would take to redo their surroundings equally well.
And as always . . .
Poem du Jour has been updated.  Have I mentioned that it's almost over and done for?  Yep.  Won't be long now.
*
Posted by Michael Swanwick at 2:36 PM