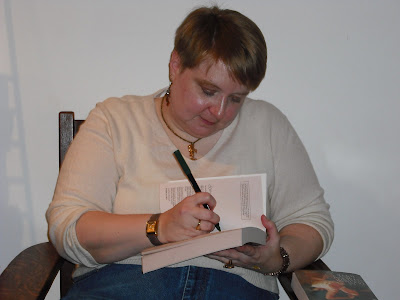 .
Sunday, I went to Big Blue Marble which, now that Robin's is (sob!) closing, is Philadelphia's premiere bookstore, for a reading from The Duchess, Her Maid, The Groom, & Their Lover a Harlequin Spice title and Victoria Janssen's first published novel. The book (so says its publicity offers "a little something for everyone - including light bondage, cross-dressin 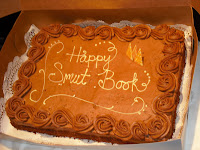 g and eunuch-on-eunuch action. A solid plot and characterizations hold it all together nicely, and the ending is unexpectedly sweet."

That's my friend Victoria above, autographing a book.

And here's a photo of the cake she brought in to celebrate with.


And Speaking of the Franklin Institute . . .

Friday I went to the Philadelphia Science Fiction Society to hear Derek Pitts, the astronomer at the Franklin Institute give a talk about recent revolutions in our understanding of the universe. Afterwards, he revealed that starting next April the Franklin will host an exclusive show titled
Galileo, Medici and The Age of Astronomy, which will include many of Galileo's scientific instruments, including one of the two surviving telescopes with which he made the discoveries that revolutionized astronomy. This is the first time the telescope has ever been loaned out by the Istituto e Museo di Storia della Scienza (this link leads to an English-language page) in Florence, Italy, and it goes straight home afterwards. No other museum will be showing it.

As it chances, I've already seen the telescope and the instruments in Florence. By kneeling down and peering through the vitrine, I was able to actually look through it. And saw an out-of-focus blur of blank ceiling, of course. That's not what matters, though. I looked through Galileo's telescope! That's what matters.

But I also saw a display there that I'll bet you dollars to donuts won't be on display at the Franklin. Here's a brief essay that I wrote about . . .

Galileo's Finger
One of the lesser-known treasures of Florence is its science museum. The Museum of the History of Science is located next to the Uffizi Gallery in the fourteenth-century Castellani Palace in Piazza dei Giudici. Its ten rooms are crammed with early scientific equipment, most from the Medici collections and almost all exquisitely crafted in the manner of the times. It's a wonderful peek into the dawn age of science.

Central to the collection are Galileo's telescopes, including the very lenses with which he discovered that Jupiter had moons, Venus had phases, and Saturn had "ears." When my wife, Marianne Porter, and I were in Florence some years ago, we of course visited the museum specifically to see those lenses.

We found one thing more: A crystal reliquary which rests without special pomp upon an eye-level shelf in a glass display case. Preserved within the reliquary is the mummified middle finger of Galileo's left hand.

It's hard to express the delighted sense of absurdity confirmed that Marianne and I felt when we discovered this particular artifact. Even for Italy, this was hard to believe. But there it was, the great man's finger, mounted bolt upright, its back facing the wall.

I ran to the nearest window to orient the case, reliquary, and finger in relation to the Arno. Then I drew a sketch and carefully entered the information in my notebook.

When we emerged from the museum, we got out our maps of Florence and of Italy. Carefully, we worked out exactly in what direction the back of that august finger was turned. When we had done so, we howled with laughter. For our suspicions were confirmed.

Sure enough, the back of Galileo's finger (and he was an Italian, which means he was fluent in the language of gesture) is directed now and eternally toward Rome and the Vatican.

(IiDoNotrc, he succeeded the second time.)