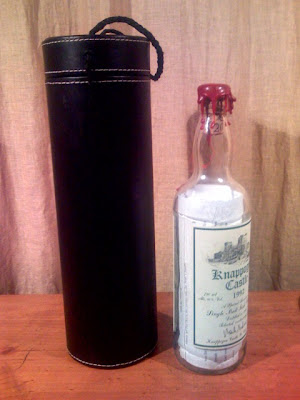 .
Everybody needs a hobby and this is mine. I'll write a short-short story, print it out, and place it in a bottle. This particular bottle once contained Knappogue Castle Irish whiskey, one of the great tipples of the world. It may even (I forget) be the bottle that I brought back from my first trip overseas in 1982, back when each bottle was individually numbered by hand.

After the story is placed in the bottle, I sign and date the glass with a diamond-tipped pen. Then I cork the bottle and Marianne covers the top with sealing wax. After writing a letter of provenance, I destroy every copy, physical or electronic, other than the one inside the bottle. It is now, in the original, unspoiled sense of the word, unique.

Finally, I give it away. Usually to a charity auction or such, but sometimes to a friend. The owner of the bottle, whoever he or she is, can either read the story or else possess the object -- but cannot do both.

The above bottle was given to my good friend Henry Wessells on the occasion of the publication of What Can Saved From the Wreckage? mostly because I knew he would appreciate it, but also in some small part because I wanted to have something of mine in the shop of James Cummins, Bookseller (where the launch party was held), which was as rare as anything else there.

How much is such a thing worth? I have no idea. Selling one for profit would destroy the purity of the thing.

You have either just dashed the hopes of any would-be Swanwick completists out there, or filled their heads with visions of extreme avarice. Either way, it was nicely done.

Thank you. The bottles were originally inspired by having seen too many postmodern art-books on display in museums. They're always beautiful as objects but the text --! Oh, man. Dreadful. So I thought I'd make my own contribution to the subgenre.

Have you considered tossing one of those bottles into the ocean? Wouldn't that get the completists scrambling!

Oh but those stories must smell so good!!! :)

Wouldn't it be incredible (and something along the lines of permanent art) to get a unique story in a bottle onto the shuttle and thrown into space?

Or perhaps use one of the x-prize entries for an autonomous moon rover to leave on on the moon.

Anyone know of a charity planning to auction one of these off?

By the way, Michael, in case you haven't seen it, this post got a mention on BoingBoing.

Ummmmm, Michael? If you ever need another friend... ;~)

Beautiful, awe-inspiring work. Thanks for sharing it with us.

Mad scientist that I am, I am now pondering the use of magnetic resonance imaging to extract the text while leaving the bottle intact. What sort of ink do you use?

re “art-books on display in museums” -- are you a fan (yet) of Mary Reynolds? She was the surrealists' bookbinder. The Art Institute of Chicago has a wonderful collection of her work, which goes on and off display in their perpetual rotation of the collection.

Her own bookplate is a simple line drawing of her profile (by Marcel Duchamp) wearing monogram earrings (by Alexander Calder).

Neil, thank you for the links. I'll have to look into Mary Reynolds' work in some depth.

On a completely unrelated note, I hope everybody here is aware of Odd Nerdrum. A very strange and evocative painter, and a distinct influence on THE DRAGONS OF BABEL, much as Cindy Sherman's fantasy photographs were on THE IRON DRAGON'S DAUGHTER.