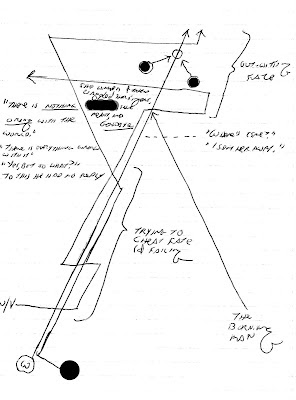 Diagram 23. We're closing on the end of the novel, and I'm really in control of what's happening here. Look how crisp and sure those character lines are! So on track am I here that I have to mask the identities of several major characters to keep from giving the ending away.

"Where's Esme?"
"I sent her away"
She winked & then waggled her fingers.
[blocked out] she meant, and Goodbye.

N/V refers, of course, to Nat and (don't call her Vickie) the Vixen.

There is a distinction between cheating fate and outwitting it. But Will is going to have to learn that one the hard way.

The conversation about the world is central to the book's argument. However, with so much coming together at the very end, there simply wasn't room for it. So I'd later have to find a way to shoehorn in that information another way.

The "She winked" and "Where's Esme?" notations are means of accounting for characters and clearing them out of the way so the climax can happen without a roomful of unresolved personalities all jostling for the reader's attention.

Note how at the climactic moment of decision (indicated by the little circle bisected by Will's character line), two separate characters come together in opposition. Then, afterwards, there's a surprise appearance by another character before everybody goes their separate ways. That nice clean plotiness wouldn't have been possible without these diagrams. At that point, I've accounted for everybody and there's a clear stage on which the major forces can battle for Will's soul. Not that he has a soul, of course -- he's a fey. But you know what I mean.