Nearer, My God, To Thee 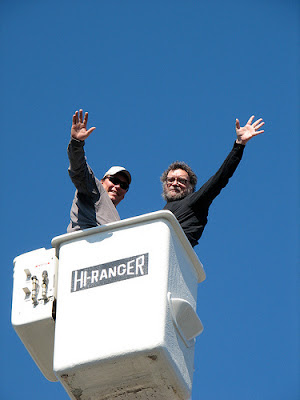 So I don't have a photo of myself hovering forty feet above the ground in a bucket truck (what we here in the North call a cherry picker) at Chattacon. But my friend and editor, David Hartwell, was there, and he had a camera, and he's shared with me the photo above and the one below.

Here's what happened: I was at Chattacon this past weekend as a guest of honor (and I've got to say that Chattanooga's got enough cool stuff for one very enjoyable weekend; but, virtuous person that I am, I resisted the impulse to blow off the convention), and had a great time . . .

Okay, let me digress. The other author goh was Lynn Abbey and in conversation she told me that she's "caught my second wind." I. e., she's bursting with new ideas, which should be great news for her fans. Peter David, probably best known to most of us for his Sir Apropos of Nothing series, confided that he regretted calling the second book The Woak to Wuin because it turns out that if you ask for that title in a bookstore the clerk will assume you have a speech impediment and won't find it, and then, turning to Lynn, swore that in the next book Sir A. would take refuge in Lynn Abbey. David Hartwell shared with the convention as much insider publisher info as he was legally allowed to. Eric Flint turned out to be one helluva nice guy. John Ringo held forth to an appreciative audience at a local restaurant. And on and on and on.

Which is to say that Chattacon was rich in the kinds of encounters you go to a convention to have.

But the coolest part of the weekend was that Taz (formally known as Jeff Reneau) brought his bucket truck to the convention. He services signs at car dealerships across many states, a job that has to among the best in existence on a good day and the exact opposite on blustery one. So, emboldened by the fact that he was an awfully likeable guy, I asked if he'd take Marianne up in it. And then . . . if he could . . . maybe . . . me?

Each bucket truck is custom-built, and Taz's truck is cooler than most in that the boom has a full 360 degrees rotation. And the experience? Wonderful and unlike anything else in the 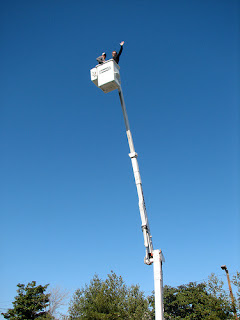 world. As Marianne said, it's not at all like being high up on a building because there's empty space all around you. And though it's rather like flying but slower and smoother. Birds would have envied me.

Even better, Taz taught me how to operate the boom and, under his watchful tutelage, I brought it down.

Taz told me that sometimes he'll take a bottle of wine and his wife Priscilla up with him to watch the sunset -- which they're able to see for something like half an hour after the people on the ground are lost in darkness.

Husbands! When was the last time you gave your wife a present half so romantic?