Early Notes Toward a Nonexistent Lexicon 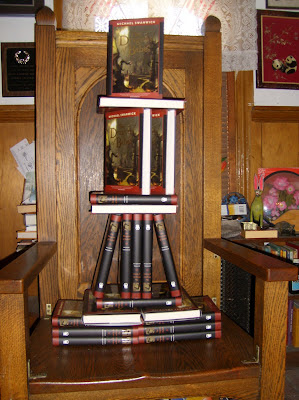 So how did you waste your morning? I spent part of mine building the Tower of Babel out of the two boxes of contractual copies of The Dragons of Babel, which arrived in today's mail.

As those who follow my nonfiction (and, counting me, there is at least one) know, I have a thing for lexicons. I've created two so far, "A Lexicon of Lud," annotating Hope Mirrlees' Lud-in-the-Mist, and "A Cloudish Word-Hoard," for Greer Gilman's Moonwise, and I'm at work on yet another, the topic of which I'll announce if and when. Yet there's no way I'll ever annotate one of my own novels. I simply know too much. The lexicon would end up longer than the work itself.

Nevertheless, it's pleasant to fantasize that somebody will someday do the same for me, even if it's not during my lifetime. So, just in case, I'll prime the pump with a few short entries that no conceivable lexicographer for The Dragons of Babel could come up with. Simply because . . . well, you'll see.

Boodles martini, straight up with a twist: Zorya Vechnayaya drinks this simply because it's my favored cocktail.

Ichabod the Fool: Most of Nat Whilk's noms de scène are of famous tricksters, drawn from world mythology. This one comes from a Zippo lighter owned by one of my fellow camp counselors at Mt. Norris Boy Scout Reservation in Vermont in the 1960s. On one side was engraved the word ICHABOD and on the other SHITHEAD. This was universally regarded as the being the very soul of wit, though nobody could explain why.

Nanshe: The somnambulist came from "Hermaphrodite," a 1992 oil painting by the improbably named (and yet brilliant) Odd Nerdrum. He also did a painting of the White Ladies manuring the fields, though not by that name.

The Roxy Movie Theater: An old movie-house that once stood at the corner of Roxborough and Ridge Avenues, a block from where I live. It had beautiful terra-cotta trim, a few small pieces of which were rescued from the rubble when it was torn down and now reside in my garden. The same building featured more prominently in my story, "Radio Waves."

Salem Toussaint: The haint politician was inspired in part by Paul Laurence Dunbar's classic story, "The Scapegoat." But his name is derived from that of Salem Flack, the last of the old-time histrionic lawyers in Washington, PA. My late father-in-law, William C. Porter, vividly remembered Salem Flack getting down on his knees before a jury and praying to an almighty and merciful God to forgive the lying, perjuring eye-witnesses who had testified against his client.

Urdumheim: Derived from urdummheit or "primordial stupidity," a nineteenth-century anthropological term, the subtleties of which I'm not about to winkle out here. I changed the -heit (or -ness) to -heim (or -home) to make it a place, and dropped the second m because it looked, well, dumb.

Le Wine Bar: The Wine Bar, in Center City Philadelphia, was where Marianne and I first discovered the joys of good wine. It was a glass of Burgess Zinfandel that sold us. At the time it was easily affordable. Alas, in matters of taste Marianne and I are early adaptors. All the world came pouring in after us and now we can afford it only on special occasions.

I spent my day making a list of links regarding diagrams of a book.

Of course, now I'll have to change the posting! And my bookstore **still** doesn't have any copies, dang it!

I particularly admire that you're willing to venture outside of your preferred genre to try my book. That's the mark of a true reader.

I suspect that the not-in-any-bookstore-before-it's-2008 thing is because my editor has an eye on the Hugo ballot. A book that comes out in December has only a few months to gather up enough readers to get nominated, whereas one that comes out in January has an entire year. This sounds (and, what the heck, is) unfair to the December book, but look what correcting that with a rolling eligibility rule did to the Nebulas -- almost all of them are won by works that appeared two years before.

Anyway, that's a pretty typical example of the sort of extraliterary decisions that publishing involves.

Oh I read fantasy, have piles of unread fantasy. I even have a fondness for time-traveling triceratops...

SF just happens to be my first love, is all.