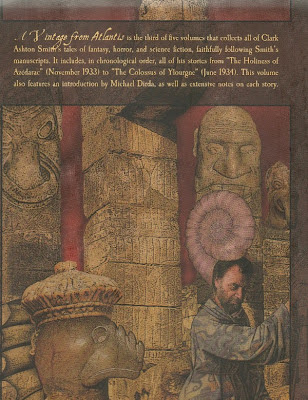 (First of all, my apologies for missing last Friday's blog. I was laid flat by a cold. This is the downside of running a one-man business. The upside? No problems with the union.)

Jason Van Hollander, with his usual modesty, wishes I wouldn't mention him in this blog so often. He's afraid it makes me look like I don't have many other friends. Well, I do my best. But when he pulls something like the above picture on me (detail below), what can I do but brag?

The picture in question appears on the black cover of A Vintage from Atlantis, volume 3 of the collected fantasies of Clark Ashton Smith, edited by Scott Connors and Ron Hilger. Night Shade Books is engaged in the comendable project of assembling the definitive texts of CAS's fantasy, science fiction, and horror in a uniform five-volume set. All of them (or at least the three to date) with covers by Jason Van Hollander. And, as you can see, Jason slipped in a portrait of me.

Not a very flattering portrait of me. But still.

For those unfamiliar with the works of Clark Ashton Smith . . . Imagine lapidarian prose harnessed to an imagination somewhat darker than Ambrose Bierce's. Imagine dark glimmery beauty in the borderlands of fantasy and horror. Imagine a body of work which inspired Jack Vance's The Dying Earth, which in turn inspired Gene Wolfe's Book of the New Sun. It's not to everyone's taste -- the prose style can be as intense as maple sugar, though in no way sticky -- but if you have a liking for this sort of thing, I fail to see where else you're going to find it.

If you're a Clark Ashton Smith fan already, you want these books. If not, why not check him out? Night Shade Books, incidentally, has got a truly astonishing lineup of authors. So they're worth checking out as well.

Finally, in the interests of keeping the man happy by limiting the frequency of posts about him, I'll mention here and now that Jason Van Hollander has a blog. Astonishing but t 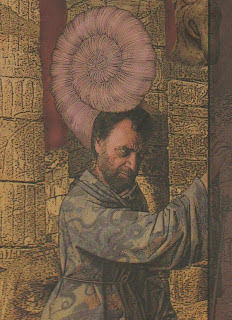 rue. It's called The Jolly Corner and subtitled The Illustration Journal of Jason Van Hollander. Mostly, it's about his book covers. (Jason is an extrarodinary designer, in addition to being an World Fantasy Award winning illustrator.) But the very first entry was penned by Yours Truly, last October, when I showed him how to set up the blog. I thought you should know that, lest you think Jason was being surly.


Posted by Michael Swanwick at 6:02 AM