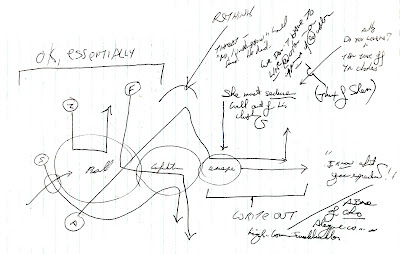 Diagram 19. Skeptics will doubt me, but things are going pretty well here. I'm midway through Chapter 13, "The Hippogriff Girl," and I've simplified the plot to three sections: Ball, Confrontation, and Escape. This particular diagram would be one that I wrote at the beginning of the morning, to map out what I hoped to write that day:

From left to right, basically:

She must seduce Will out of his clothing

Do you really love me? Then take off your clothes.

"I know what you expected!"

A sense of who Alcyone is . . . a high-born swashbuckler

A is for Alcyone; Z is for Zorya Vechernyaya, my candidate for police officer you'd least enjoy having arrest you; F I've already said I'd like to keep nameless; and S is for Shorty, known by that name only to his employer. To the rest of the world he's Hrothgar Thalwegsson. Just how much money do you have to have to get away with calling a dwarf "Shorty" to his face?

The fact that I deemed the Ball section "OK, essentially," means that it was already pretty much writtten. The Confrontation with F still needed work. There was so many information that had to come out in this section that F was beginning to sound like a Bond villain -- and, honest, I was aiming for something better than that. Eventually I solved the problem by introducing a manticore as a character. There's nothing like a manticore for cutting the grease!

The bits of dialogue are written in a form invented (I believe) by my old college friend Jay Schauer who, when he had dialogue to write and was moving too fast to work it out properly, would jot down a rough approximation of what the characters were supposed to get across to the reader, and then come back and compose their speech later, when he had the time. Like so:

Hamlet: Yorick was a jester. I liked him, he was funny. It bums me out that he's dead.
Horatio: I feel your pain, my lord.

I note that at this point the notion that Alcyone was going to have sex with Will by the end of the chapter is entirely (and quite rightly; it would have been out of character) gone, replaced by a jape that you'll have to read the novel to learn about. But she's still not the complicated person she was soon to become. A "high-born swashbuckler" indeed! Though that is what she wishes she could be and what Will thinks she is.

The Escape was more or less complete in my head at this point, which was why I was scolding myself to write it out.
Posted by Michael Swanwick at 9:44 AM