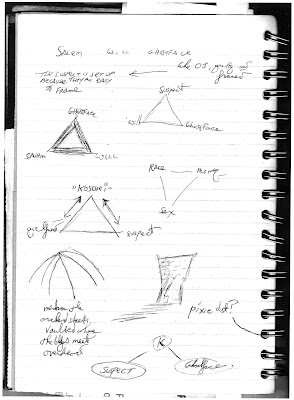 Diagram 17: Oh, we're cooking now! You can practically smell the brain-grease sizzle. The section that became "A Small Room in Koboldtown" came on hard and fast. On the left-hand page of my notebook are my diagrams. On the right-hand page (not pictured) are plot notes. I'll transcribe them below, after my annotations.

From top to bottom:

The suspect is set up because they're easy to frame

mention the arched streets, vaulted where the bldgs meet overhead

Salem Toussaint's name and a great deal of his character came from Salem Flack, the last of the old-time lawyers in Washington County, Pennsylvania. My late father-in-law, William Christian Porter vividly remembered Salem Flack getting down on his knees before a jury, clasping his hands, gazing up toward the ceiling, and praying to an Almighty God to forgive the lying, perjuring witnesses who had testified against his client.

Ghostface's name (and his brother Ice's) were taken from hip-hop culture because although Pan-African folklore is as rich as Pan-European folklore, it's not as widely distributed in our society. And I needed that vague sense of familiarity for the names to work.

OJ was guilty. The cops framed him. Once you assume both premises are true, everything falls into place.

Those of my former students who wonder whether my notion of relationship triangles really is of any potential application should go over this section of the novel when it comes out and look for the triangles -- they're all there. Which is not to say that they'll work for everyone. "There are nine and sixty ways of constructing tribal lays -- and every single one of them is right," as Uncle Rudy was fond of saying. Writers are a varied lot.

I'm not sure I ever found the opportunity to mention the buildings arching over the streets. And I have no idea what that rough hourglass of a building is supposed to be about!

Will could go to Nat for help. (But would he?)

Cheap midnight diners -- "most magical place in the world," he said.

S. T. encouraged rumors that he had owned yachts, estates, a ruby the size of a simurgh's egg, though there was no honest way he could have amassed such wealth. "Better a crook than a pauper," he'd say with a smile and a wink.

Fennel -- he's the janitor. The doorman takes the fennel down to let him in and out.

"No money." The cops obviously believe they're right -- they're not threatened.

Not a lot needs to be said here. I don't think I used the diner comment but, boy howdy, is it evocative! Nor the riff about Salem Toussaint's (nonexistent -- he is, in his way, perfectly honest) riches. It's like the vaulted roofs -- a lot more ideation goes into creating a fantasy than can be crammed into the novel.

The fennel was borrowed from Hope Mirrlees's masterwork, Lud-in-the-Mist. Some (the estimable Julia Briggs for one) would argue that it was Paris: A Poem which was her chef d'oeuvre. Either way, she has my admiration.


Posted by Michael Swanwick at 7:47 PM