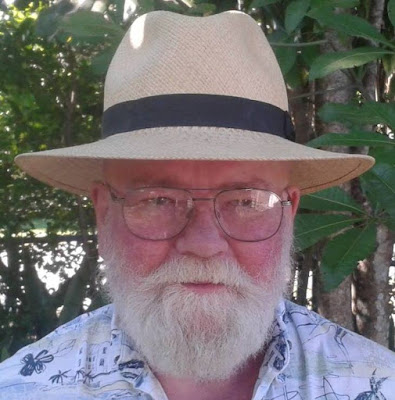 David Sherman is dead. Tom Purdom used to introduce him as "walking time bomb David Sherman" because that was the slur upon combat vets at the time, but of course he was nothing of the sort. He was a good man and excellent company.

David began his writing career by writing military fiction because as an ex-marine who had served in Vietnam that was something he knew well. He moved on to military science fiction, both solo and in collaboration with Dan Cragg. His work was highly regarded.

It has been a long, long time since I've seen David. Many years ago, he moved to Florida for the weather (and, he would have said jokingly, the women). But it was always comforting to know he was out there, writing and enjoying life.

Now he's not, and the world is a sadder place for that. David was solid stuff. He had a good sense of humor. You'd have liked him.

Above: I found this picture on Facebook. I believe it was taken by his friend Colin Wolfe.

Posted by Michael Swanwick at 7:06 AM