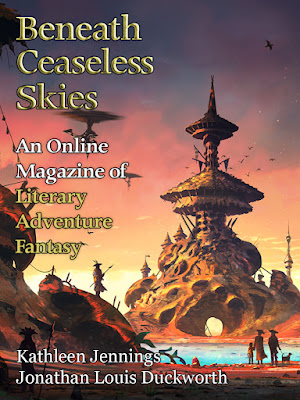 This is not a review, exactly. It’s more of a speculation on “Eshat’s Temple,” a story by Alvaro Zinos-Amaro that begins:

In the shimmering white settlement of Belaqua, there lived a woman named Eshat who was said to be the most just Mistress of a House of Books who had ever lived in the nine realms. Rumor claimed that her skills with the Translator’s Almanac were so magnificent, and her attunement to the Goddess Ayfer so strong, that not once during her decades of service had Eshat failed to match up a reader with the text that would prove most life-changing to that particular person.

In quick order a picture is drawn, and drawn well, of a fantasy world ruled (at least in the nine realms) by librarians.

I think we can all agree that this would be a fine thing.

With wisdom and a ready supply of reference works, Eshat has made her town as just and happy a place as is humanly possible. This being a story, however, and stories requiring conflict, a series of events transpire that strike at the center of the town’s happiness.

At which point I must ask you to go directly to Beyond Ceaseless Skies to read “Eshat’s Temple” by clicking here.

You’re back! Did you read the story? All the way to the end? That’s good because I’m going to stop synopsizing now and go straight to the conclusion of the story. There are nothing but spoilers from here on.

Eshat is a Muslim name meaning Love. The name of the Goddess, Ayfer, means Moonlight in Turkish. So it’s not much of a stretch to say that Belaqua has been ruled by love and that when Eshat consults moonlight in a vision, she is accessing her creative imagination. When she returns to reality, she no longer needs the fossilized rules codified in a single Almanac and by freeing herself from the story she has been trapped within, inherits all the stories that exist within the near-infinite ocean of streams of stories.

So on the surface, this seems to be a story about a woman who trades one story for all stories, authority for freedom, dogma for a world of possibilities. And, yes, it's all of that. But I wonder. It seems possible to me that this is a story about one particular story, and that that particular story is Ursula K. Le Guin’s “The Ones Who Walk Away From Omelas.”

Omelas, you will recall, is a city of perfect happiness which rests upon the misery of a single child. On reaching adulthood, each citizen of the city is shown the child. Most manage to live with the fact. But some few cannot, and walk away to create a city which Le Guin confesses is beyond her imagining.

Eshat, it seems to me, is that child grown to adult stature. It is not necessary to explain why she is no longer miserable. Perhaps that misery was fleeting. Maybe Le Guin exaggerated. Perhaps she has merely swallowed back her pain. But in any case, she leads the most constricted of existences. She can only do as the Almanac directs. She has no agency.

Then, in the end, Zinos-Amaro grants her that agency. And she walks away from Belaqua/Omelas, the only one in the history of the city whose desertion really matters.

Anyway, that’s my theory. What’s your take on the story?

The link to the story under consideration just leads back to this blog post. I'm gonna assume cut-and-paste mishap rather than some kind of Borgesian hypertext narrative I am not clever enough to unpick. :)

Hi, Peggy -- I went to the Beyond Ceaseless Skies site and found the story easily enough by searching for the author's name. It's in issue #353, April 7, 2022.

My apologies to everybody, especially Peggy. I've made the correction.

My take is that I'm goodly gifted to live the story where yours & Zinos-Amaro teaches me.

Thank you, good storytellers, wise writers of our worlds, for using your truth for love.