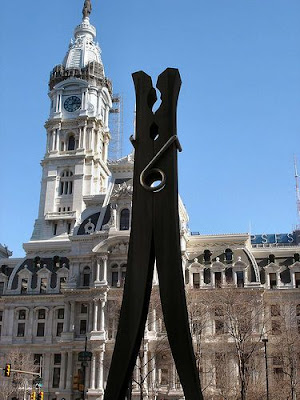 Claes Oldenburg died the other day and the world is a little less fun than it used to be.

Oldenburg's best-known works, often created with his wife Coosje van Bruggen, were enormous sculptures of everyday items. There are four such sculptures in Philadelphia--a broken button on the University of Pennsylvania campus, a four-way plug in the sculpture garden of the Philadelphia Museum of Art, a paintbrush with a daub of fallen paint on the sidewalk below in front of the Pennsylvania Academy of fine art, and a clothespin directly across from City Hall.

That's it up above.

When the Clothespin went up in 1976 (Oldenburg denied that the spring, shaped like a 7 on one side and a 6 on the other, had anything to do with 1776 or the Bicentennial it was commissioned to celebrate; but few Philadelphians believed him), street vendors tried selling framed souvenir photos with a real clothespin glued over the sculpture. But they didn't work and they didn't sell. Because Oldenburg didn't create a realistic clothespin but an idealized clothespin. It looked no more like a real clothespin than Michelangelo's David looks like your typical schlub of a couch potato.

If Claes Oldenburg had never existed, Philadelphia would not today have a 45-foot tall heroic statue of a clothespin.

I think that says it all.

You can find NPR's memorial to Oldenberg here.