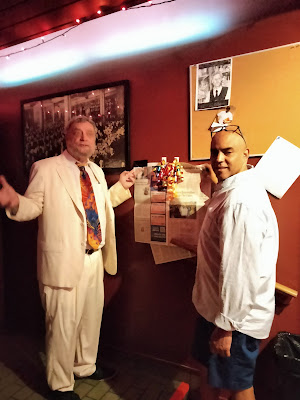 Last Friday, I had the honor of unveiling the Gardner Dozois plaque at the Pen & Pencil Club with Gardner's son Christopher Casper. The Pen & Pencil being a press club, the plaque was veiled with pages from the Philadelphia Inquirer.

Gardner is, of course, best known for his 19 years as editor of Asimov's Science Fiction and his 35 years editing The Year's Best Science Fiction. But he began his literary career as a military journalist for The Rolling Review and then Stars and Stripes. His training as a journalist formed the foundation for his subsequent careers as a writer and an editor.

The plaque was paid for by Gardner's friends and fellow club members (known among ourselves as "the cronies") with the support of the officers of the Pen & Pencil Club.

Not shown are the many friends of Gardner who showed up for the dedication. But their presence was greatly appreciated. After the unveiling, they lingered for a celebratory party in which we all exchanged our favorite stories about Gardner.

Though I did not say it at the time, I could not help thinking of Dr. Watson's words about Sherlock Holmes, "I shall ever regard him as the best and the wisest man whom I have ever known."

And, yes, even unsaid, I could hear Gardner scoffing at those words.

And because I know you want to hear one of those stories. . .

When he was a military journalist, Gardner was sent to take a picture of a crashed helicopter.

He went to the airport and waited for the helicopter sent to take him to the crash site. He was standing on the tarmac when Whomp! Whomp! Whomp! the copter came down and CRASHED! right in front of him.

So, figuring that one crashed helicopter looked like any other, Gardner took a photo of the ruined helicopter and went back to base. 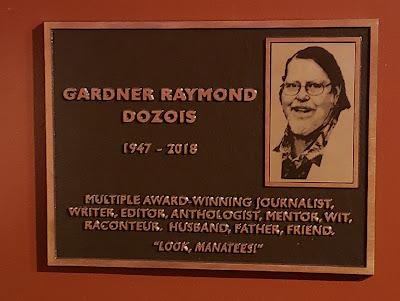 Posted by Michael Swanwick at 5:16 PM