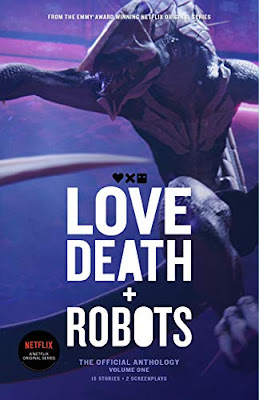 Tim Miller, the co-creator of Love Death + Robots, has arranged a kind of gift for its fans: an anthology from Cohesion Pres of all the original stories (and for a couple of items screenplays) that the episodes of the first series were based on.

To be specific, that's:

The Witness by Alberto Mielgo

Sucker of Souls by Kristen Cross

Beyond the Aquila Rift by Alastair Reynolds

The Dump by Joe R. Lansdale

Which is, to state the obvious, one heck of a good anthology. With the added benefit that fans of the series can compare and contrast the original stories with the animations, to see how they differ and what went into the translation.Which is, speaking solely for myself, goood geeky fun.

Available in trade paperback. Wherever fine books are sold. I recommend your local independent bookstore.

Posted by Michael Swanwick at 9:21 AM