Cocktails at the Rosenbach 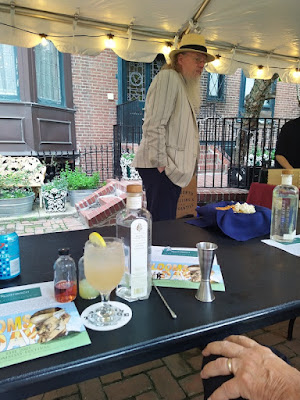 Marianne and I are fully vaccinated and the infection rates in Philadelphia are way down, so we've started doing things again.

Most of Saturday was spent at the virtual Laffcon, a free, one-day celebration of he works of R. A. Lafferty. For me,  the highlight was an interview with Greg Ketter and Bryan Cholfin, who back in the day created small presses to publish Lafferty's work. Which was by then deemed unprofitable by the major presses.

The major presses had a point. Both Greg and Bryan agree that Lafferty has an avid readership of somewhere between seven hundred and one thousand. Enough, as one of them put it, to ensure that they "didn't lose too much money." Certainly, nobody got rich. When asked if they might ever publish more of Lafferty's work, Ketter said that he was coming up on retirement age and might well return to the project after that. But Cholfin replied, "Not a chance!"

So there you are. Except to note that they both found Lafferty to be extremely genial and easy to work with. When one asked for a small alteration to a story, he replied, "Just write whatever you like."

Which is not how writers usually react to such requests.

Then, Marianne and I went to the Rosenbach, a museum and library harboring one of the world's greatest collection of rare books and manuscripts. (It has the only complete manuscript--there are several, but the others were broken up and sold in pieces--of James Joyce's Ulysses.) There, we took part in a cocktail workshop. Not that we don't know how to mix cocktails, but because it looked like fun and benefited a worthy institution.

It was held in the Rosenbach's garden and it was great fun. Also, far from the first time, Marianne and I found ourselves the oldest people there. I'm proud of that.

Top: The man in the striped Jacket is Edward Pettit, who organized the event. Expertise was provided by Nick and Lee,  from Art in the Age of Mechanical Reproduction (bar supplies and tasting room) here in Philadelphia. The gin was from Tamworth Distilling, which is in New Hampshire but own by Art in the Age.