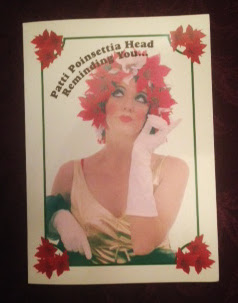 Thanksgiving is over. The paper bats have been taken down and the colored lights have been strung on the porch. Which means that...

This grand tradition began many years ago, when the late, great Jim Turner began examining my Christmas cards to him for religious content and calling scorn on me if he found it. "Those are the Reindeer of Secular Enlightenment bringing Socialist Discourse to the world!" I would tell him.

"You're not fooling anybody, Swanwick," he would reply. "Those are fundamentalist reindeer, trying to sneak religious sentiment past me. Well, it won't work!"

Jim's keen-eyed rejection of anything religious alerted me to just how many of the cards we received during the season had no religious sentiment at all. Not one scrap! So I assembled the Not At All Nepotistic Blue Ribbon Panel of Family and every year this scrupulously honest and uncorruptible board of nonpareils goes over the cards looking for the perfect exemplar of the Godless Atheist Christmas Card spirit.

This year's results will be published sometime after (obviously) Christmas.

Above is a past winner by brilliant photographer (the fuzziness of the image was my doing, not hers) Beth Gwinn. I hired her to do my publicity photos, and it was money well spent. You can find her webpage here.